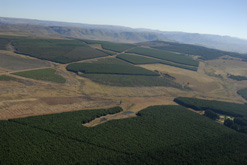 Volvo has made care of the environment one of its priorities for many decades, and the car manufacturer now takes its commitment one step further with the new collaboration with Sappi. The two companies are encouraging Volvo drivers to sponsor the planting of a sufficient number of trees per Volvo car sold to mitigate the emissions of harmful gas from engines.

Once a donation has been made Sappi and Volvo will take care of the rest. The project’s name comes from the fact that a blue planet, say the companies on the GreenForBlue website, is a healthy planet – but blue can only be achieved by starting with green.

As they mature, trees purify the air by carbon sequestration. This term refers to a number of processes, whether natural or artificial, whereby carbon is removed from the atmosphere and stored in a solid material – in trees this wood material is around 50% carbon.

Two thirds of Sappi land is currently used for plantations and the remainder is managed for conservation purposes. GreenForBlue trees will be planted in suitable areas identified by Sappi and belonging to the company, including land near roadsides and between plantations. Planting trees on Sappi property also ensures that they will be properly looked after in order to fulfil their important function.

GreenForBlue is linked to Sappi’s Sandisa Imvelo (Growing Nature) campaign for fighting climate change by planting more indigenous trees, and thus not only conserving the biodiversity and natural habitats of the areas where the company conducts operations, but also reducing its carbon footprint.

Sappi says that South Africa’s indigenous biodiversity is particularly rich in all spheres – the country has more than 1 100 indigenous trees compared with the UK, which has less than 100. Sandisa Imvelo provides a focused platform for enhancing and appreciating this remarkable green heritage.

Sandisa Imvelo will oversee the planning of 10 000 trees, on average, per growing season. Trees are sourced from the “Trees for Life” programme of the Wildlands Conservation Trust, which operates a series of a social development projects that help communities. The Trees for Life initiative draws on a network of participants, usually orphaned and vulnerable children, who grow indigenous trees to earn a livelihood. The children barter the trees for food, clothes, bicycles and other basic necessities, and the trees are planted out in greening or forest restoration projects.

One indigenous tree, says Sappi, will dispose of about 18kg of carbon dioxide annually. The company has calculated exactly how many trees are required to offset the gas emissions of each Volvo model. For instance, the Volvo C30 will require 11 trees to grow for 100 years to offset the amount of greenhouse gas produced over a distance of 100 000km (about five years). While the original trees might not last that long, they will propagate over time to form their own green area.

Sappi has a long and distinguished history in the area of conservation. Among the company’s achievements are the greening of avenues around Hector Peterson Memorial in Soweto with 1 000 trees; countrywide initiatives during annual Arbour Week; a R10-million ($2-million) investment in the Sappi/WWF TreeRoutes Partnership; establishing the initial capital for the Table Mountain Fund; and sponsorship of the rehabilitation of Newlands Forest in Cape Town.

Volvo, meanwhile, contributes to the mitigation of carbon emissions from its products by funding the United Nations’ certified climate-neutral projects, such as renewable energy production in China and India. On 1 January 2008 the company put into place a policy that all electricity delivered to its plants in Sweden and Belgium is derived from hydropower, or green power.

Cutting down on SA’s greenhouse gases

Moves are currently afoot to develop South Africa’s carbon capture and storage capabilities. A new initiative announced in October 2008 and supported by a number of major local corporates, aims to develop a carbon dioxide storage atlas in the Southern African region. An initial assessment of the project is due for publication by April 2010.

South Africa as a country emits about 1% of the global total per year – this equates to around 400-million tons of carbon dioxide (CO2) every year. The newly-launched carbon dioxide capture scheme entails removing the gas as it emerges from industrial flues, then compressing it under pressure into a liquid form and injecting it for storage into suitable geological formations such as spent oil and gas fields.