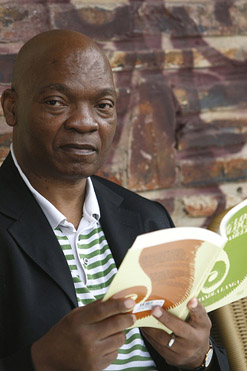 He won the award for his latest novel The Lost Colours of the Chameleon.

Langa’s victory was announced at the 2009 Time of the Writer Festival in Durban, KwaZulu-Natal.

On winning the award Langa said, “I’m dumbfounded and thrilled at the news, which I’m savouring slowly. The regional award gives impetus to my writing and enables me to have even bigger dreams.”

New kid on the writers’ block, Nigerian Uwen Akpan, took the Best First Book Award, also for the Africa region, for his piece, Say You’re One of Them.

Both authors will now compete for the overall prizes with other regional winners.

A further six finalists from Canada and the Caribbean, Europe and South Asia and South East Asia and the Pacific are in the running for the overall Best Book and Best First Book awards.

The regional winners are due to gather in New Zealand, where the winners will be announced on 16 May at the Auckland Writers’ and Readers Festival (AWRF).

South African minister of Arts and Culture, Pallo Jordan, congratulated Langa saying he is impressed with the milestone that Langa has achieved, “Given the awards already won this year, it was our expectation that the regional winner would also come from here,” he said in a statement.

Based on the fictitious island of Bangula in the Indian Ocean, The Lost Colours of the Chameleon uses satire to discuss and dissect the initial struggles of most post-colonial democracies.

The novel deals with heavyweight issues such as corruption, nepotism and bureaucratic incompetence.

Bangula is populated by an indigenous community that coexists uneasily with Creoles, mainly descendants of ancient Portuguese colonisers.

The novel follows the story of Colonel Gondo, a patriarch who is the father of the newly reformed nation of Bangula.

When Gondo dies, his three sons become embroiled in a succession struggle, each one wanting to fill his father’s shoes.

Commenting on the novel Elinor Sisulu, head judge for the Africa region, says Langa’s book stood head and shoulders above the others, “Mandla Langa’s Lost Colours of the Chameleon emerged as the strongest contender in a field of works of the highest technical proficiency.

“Langa deconstructs the inner workings of a mythical African state, laying bare the frailties of leaders too blinded by power to effectively confront the major challenges of their times.”

Sisulu says Langa was flawless in his construction of the story.

“[Langa] threads the characters and their stories into the weave of his overall agenda – to provide every citizen reader/thinker/talker the vocabulary with which to confront the origins of the paralysis at the heart of the failure of the African state. In a South Africa, and in an Africa, where merely cataloguing the ills of the state has been the norm.”

A passion for writing

Lost colours of the Chameleon is Mandla Langa’s fifth book.

Langa’s early literary influences included the Bible, James Baldwin, John Creecy, and various comic strips. He originally planned on becoming a cartoonist, but that dream collided with the art of writing.

In his formative years, running concurrent with his love for writing was Langa’s involvement in the political struggle.

After being arrested in 1976 Langa skipped bail and went into exile.

He has lived in Botswana, Lesotho, Mozambique and Angola, where he underwent Mkhonto we Sizwe military training in Zambia, Budapest and London.

Langa has held various ANC posts abroad, including cultural attaché in the UK and Western Europe.

Recognising writing across the globe

Now in its 23rd year, the writer’s competition celebrates fiction writing across the regions of the Commonwealth: Africa; Canada and the Caribbean; Europe and South Asia and South East Asia and the South Pacific.