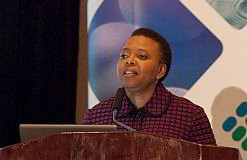 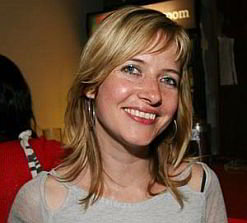 Lauren Beukes is one of the women
included in the book and her book,
Zoo City, recently won the prestigious
Arthur C Clarke Award.
(Image: The British Science Fiction Association)

As the nation celebrates the triumphs of South African women during August, known as Women’s Month, the Mail & Guardian newspaper has joined in with the release of its Book of South African Women.

The Mail & Guardian Book of South African Women is an annual publication that celebrates the accomplishments of 100 newsworthy women. It was launched in 2008 and the selection is wholly nominated by the public but the final 100 is chosen by the editorial board.

The result is a mixture of well-established industry personalities and future industry leaders.

The women were chosen in categories ranging from arts, business, civil society, environment and media, to politics, science and technology, health, education and sport.

Nic Dawes, editor–in-chief of the Mail & Guardian, said: “This is not a directory of the most influential women in the country, although certainly many of those represented occupy positions of considerable power. Instead it is an annual effort to discover and represent people who are doing transformative work.”

He added that 80% of those featured are making their debut in the book, that many of them are young, and perhaps less well known. But this doesn’t mean that they are any less worthy of recognition, said Dawes, than the female icons who can’t be left out of any such list.

The sponsor of the publication is banking group Nedbank.

Abe Thebyane, group executive at Nedbank, said: “The 2011 Mail & Guardian Book of South African Women profiles some of our country’s most inspirational women. They come from dissimilar backgrounds, and the work they do is across different sectors and in disparate disciplines.”

He said that one thing all those featured had in common is that they are all driving change in the country.

“In this they share courage, resolve, vision and a fundamental belief that our country and our world can be transformed for good.”

The Book of South African Women has profiled a diverse group who are making waves in different sectors of society.

“We have to use the characteristics that allow us women to open a door on to a more enlightened consciousness,” said Moholi, “and one that will allow humanity to invent a future that promotes the wellbeing of women.”

Classen, who has taught in the violence-prone area of Lavender Hill in the Cape Flats for 35 years, said that she was a dedicated teacher, but also felt like a parent to many of her young charges, and this has kept her in the education sector for so many years.

The University of Cape Town can revel in pride at the inclusion of 15 of its graduates in the publication.