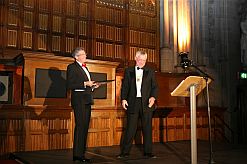 Professor Ken Boffard, is the first African
to be elected as the president of the
International Society of Surgery (ISS).
(Image: www.asgbi.co.uk)

Professor Ken Boffard, chief specialist and clinical head of surgery at the Charlotte Maxeke Johannesburg Academic Hospital, has been elected world president of the International Society of Surgery (ISS).

He is the first African to be elected world president in the organisation’s 110 years of existence. The ISS is the largest and oldest global surgical organisation. Founded in 1902, the body represents general and specialist surgeons in 108 countries.

Professor Boffard will lead the organisation during, 2010 and 2011. Speaking of his appointment, he said. “To me, this offers an opportunity to join existing resources worldwide in improving surgical education in situations where it is not necessary available.”

“I regard my election as a direct compliment to Charlotte Maxeke and its staff, for the work they have achieved. I am looking forward to working with my colleagues to broaden access to surgery.”

Boffard trained for in medicine at the University of the Witwatersrand, where he is the currently chief specialist and clinical head of surgery. He worked in the United Kingdom before returning with his knowledge and skills to one of South Africa busiest trauma centres at Charlotte Maxeke, Johannesburg Hospital.

His specialities include vascular trauma, critical care, trauma systems, and trauma education. He is the former World President of the International Association for Trauma Surgery and Intensive Care. He has also served as the South African Governor of the American College of Surgeons.

“The election of Prof Boffard to the highest office of this world organisation is proof yet again of the calibre of health professionals and the high level of expertise that we have in the public health sector, said Qedani Mahlangu, the country’s Gauteng provincial minister for Health and Social Development.

“We wish him well and we are certain that he will represent our country and our province well. His knowledge, skills, and years of experience have indeed contributed to making Charlotte Maxeke hospital a centre of excellence,” said Mahlangu.