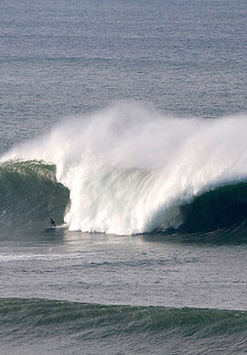 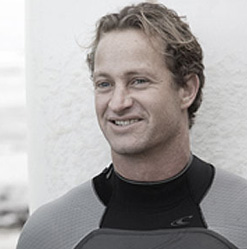 Bertish laughed when I asked whether the borrowed board was a handicap. “When you’re riding the biggest waves of your life you want to be on your own board. It’s a bit like a showjumper arriving at the Olympic Games and having to ride a different horse.”

But that was only one of the hurdles that he’d overcome on the way. You don’t just enter Mavericks, you have to be invited. And only 24 are invited, so you have to be one of the top big wave surfers in the world.

Bertish cracked the invitation list for the 2009 Mavericks after 10 years of hard work and perseverance, but then the waves weren’t big enough and the contest cancelled. But he refused to give up, spending several months of last year in the US training, maintaining his top-24 ranking and waiting for this year’s event.

“Eventually I had to give up and come home,” Bertish said. “It was just too draining, physically, emotionally and of course financially. I’m not a pro surfer; I’m an agent for O’Neill and Ocean Minded and have a business to run. So in January I decided okay, that’s it, I have to get on with my life.

“Then on Thursday 12 February it suddenly looked as if the contest might be on. And I realised that if I didn’t take the opportunity then I’d regret it for the rest of my life.

“I finished up a meeting, arranged to borrow the money for my ticket and headed to the airport without even a change of clothes or my toothbrush. When I got on the plane at midnight I still wasn’t sure that the event would happen.”

When he arrived in California the conditions were extreme, but the invited surfers voted to stage the contest. The swell was coming from a precarious westerly direction, which drew the current straight into a crop of rocks known as the Boneyard. Everyone knew that the penalty for wiping out would be swift and severe. The storm system that generated the swell had developed close to shore and the ocean surface was raw and angry.

It wasn’t the best of starts. After negotiating several big waves in the first heat, Bertish got caught inside and took three gigantic waves on the head.

“It was scary, very scary. By the time I got picked up [by a jet ski] I was like a lifeless corpse. I thought I was done for the whole day. But in life there are times when you only get one chance to realise your dream. So I just put it in my head that I had to get back up.”

Fortunately, he had scored well enough on his previous two waves to advance to the semi-finals. Once there, he wowed the judges with a hotdog manoeuvre, pulling into a condo-sized barrel — a feat rarely attempted, or even considered possible, at Mavericks.

In the final, he got lucky and caught the best of tricky low-tide conditions that saw numerous lulls and massive mutant waves that doubled up and detonated on the inside reef.

It was a historic moment: the waves, estimated at over 18 metres (60 feet), were the biggest ever for a paddle-in (as opposed to a tow-in) competition.

Head judge Gary Linden, who was also director of the Red Bull Big Wave Africa competition at Dungeons off Hout Bay in the Western Cape, South Africa, told the Santa Cruz Sentinel that it was Bertish’s willingness to take risks and make death-defying drops that won him the title.

Mark Conley of Mercurynews.com was more graphic: “They crowned a survivor as much as a victor…. Shattered boards, bleeding lungs and heads scuffed over the jagged sea shelf below were all part of a day’s work.

“On a day where agony-of-defeat wipe-outs outnumbered thrill of victory successes, Chris Bertish of South Africa was the last man standing – and miraculously, all of them were still breathing.

Bertish described it as “epic”. “I was up against my idols and heroes of the last 10 years so to arrive exhausted, having flown half-way around the world, and come out tops under those conditions was just incredible.”

But many of his peers weren’t surprised. Fellow big wave-surfer and Red Bull Big Wave Africa semifinalist Barry Futter is full of respect. “Chris has done some crazy things over the years including being the first person to paddle-surf Jaws in Maui, strictly a tow wave only spot! This success and recognition is long overdue.”

The win gained Bertish immediate hero status in the US. “You have no idea how big Mavericks is over there. It’s like the Superbowl for them, or the World Cup for us.

“After a night of celebrating I went out to the airport to fly home and everyone was coming up and wanting to have their picture taken with me. The guy at the check-in desk laughed at my surprise, saying: ‘Bud, I don’t think you understand what you’ve done. You’re a national hero.’

“Sixty thousand people watched the event live and it was beamed out to another 2-million worldwide. I guess it was a bit of a fairytale. I was the underdog realising his dream.

“And after all the doom and gloom of the last year it was a feel-good story that everyone wanted to be part of. It just goes to prove that if you truly believe and set your sights on something then you can make your dreams come true.”