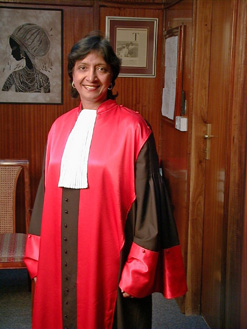 South Africa’s Navanethem Pillay, the UN
High Commissioner for Human Rights and,
according to Forbes magazine, the 64th
most powerful woman in the world.
(Image: Peter Gruber Foundation)

South Africa’s Navanethem Pillay, a former judge and antiapartheid lawyer appointed United Nations High Commissioner for Human Rights in July 2008, is one of Forbes magazine’s 100 most powerful women in the world.

In its August 2009 edition the globally respected US-based magazine features a range of ambitious women from across the world who are influential in business, government and philanthropy. Pillay, debuting at number 64, is the second African to make it on to the list, placed three spots ahead of Liberian President Ellen Johnson-Sirleaf.

Forbes said it ignored celebrity status when compiling its list, opting rather to use a combination of two scores: visibility – the number of press mentions – and the size of the organisation or country the woman leads. And by that metric, Pillay qualifies. The UN body she heads employs 1 000 people and has an annual budget of about R945-million (US$120-million).

As the top UN human rights watchdog Pillay is charged with “upholding universal ideals of human dignity”, and has a “unique mandate from the international community to promote and protect all human rights”, according to the mission statement of the Geneva-based agency.

The daughter of a bus-driver father and an unschooled mother, Pillay grew up in a poor suburb of Durban in South Africa’s former Natal province, now called KwaZulu-Natal. She lived in a segregated, Indians-only community enforced by the apartheid government’s Group Areas Act, which barred people from living, operating businesses or owning land anywhere else but in the areas designated for their particular race.

Supported by donations from members of her community, Pillay studied at the then University of Natal, graduating with a Bachelor of Arts (BA) degree in 1963 and a Bachelor of Laws (LLB) in 1965. She later attended Harvard Law School in the US, obtaining a Master of Laws (LLM) in 1982 and a Doctor of Juridical Science degree in 1988.

In 1967 she became the first woman to open her own law practice in Natal. She had no alternative: “No law firm would employ me because they said they could not have white employees taking instructions from a coloured person,” she said.

During her 28 years as a lawyer in South Africa, she defended antiapartheid activists and helped expose the use of torture and poor conditions of political detainees. When her husband, Gaby, was detained under apartheid laws, she successfully sued to prevent the police from using unlawful methods of interrogation against him. In 1973 she won the right for political prisoners on Robben Island, including former president Nelson Mandela, to have access to lawyers.

‘Rape no longer a trophy of war’

In 1995 Pillay joined the International Criminal Tribunal for Rwanda – established by the UN Security Council to try those held responsible for the 1994 Rwandan genocide – and was elected judge president of the court in 1999. The only woman on the panel, she presided over cases that established mass rape as a form of genocide.

“From time immemorial, rape has been regarded as spoils of war. Now it will be considered a war crime. We want to send out a strong signal that rape is no longer a trophy of war,” Pillay said after her landmark verdict.

She also served as International Criminal Court judge based in The Hague, Netherlands, from 2003 to 2008 and was the first black judge of South Africa’s high court, being nominated for the position in 1995 by Mandela.

“Judges were all white and male,” Pillay told The Sydney Morning Herald on 26 July 2008, adding that “the first time I entered a judge’s chambers was when I entered my own”. As a black lawyer under apartheid, she would have been barred from entering a judge’s chambers.

Pillay is also noted for co-founding the local nongovernmental organisation Advice Desk for the Abused and running a shelter for victims of domestic violence.

As a member of South Africa’s Women’s National Coalition – formed in 1991 to bring women together as a unified force – Pillay contributed to the inclusion of an equality clause in the country’s Constitution, which prohibits discrimination on the grounds of race, religion and sexual orientation.

She is also a founding member of Equality Now, an international women’s rights organisation based in New York. In July this year she appealed to US President Barack Obama to either release Guantanamo Bay detainees or try them in a court of law.

Pillay traces her interest in justice back to an incident when she was six years old. One day her mother asked her to take R5 (63 US cents) to her father at work. This was a sizeable amount at the time, equivalent to the bus driver’s monthly wage. During Pillay’s journey, the money was snatched by a bus conductor, who was later arrested and taken to court.

“I ended up giving evidence in court … in the same Durban High Court where I many years later sat as a judge,” she recalled in an August 2002 audio interview with the Gandhi-Luthuli Documentation Centre at the University of Durban-Westville in KwaZulu-Natal.

“And this individual was sentenced to three months imprisonment. But what really bugged me is that we didn’t get the R5 back and I felt so guilty as a child that I had caused the loss to my parents.”