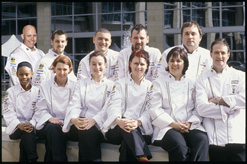 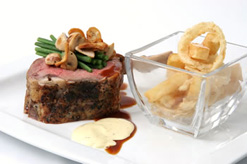 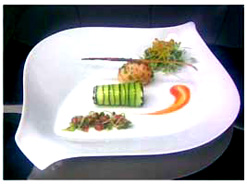 A desert creation by Candice Philip. 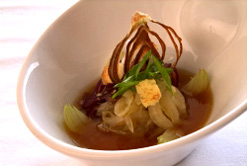 13 of South Africa’s top chefs will face the tough challenge of titillating the taste buds of judges when they represent the country at the Internationale Kochkunst Ausstellung (IKA) Culinary Olympics in Germany from 19 to 23 October.

IKA 2008, as the competition is loosely named, will boast 40 national teams, 90 regional teams, 11 military teams and 2000 chefs and confectioners.

Like the traditional Olympics, winners from the different categories will receive gold, silver and bronze medals respectively.

Competitors will be expected to demonstrate their superior culinary skills in 20 categories that consist of every aspect of the high-culture of haute cuisine and patisserie (pastry or confectionary).

Held every four years, the competition has been in existence for the past 100 years in Germany.

It has grown phenomenally from its humble beginnings. It began as a local cooking contest in 1896 at the Frankfurt fairgrounds. Up until 1996, this remained the location for the competition. It then moved to Berlin, and is now currently held in Erfurt.

The team representing South Africa at the Olympics has been carefully selected. All the team members have made strides in their careers, which gained them the necessary recognition to compete in the Olympics.

Allistaire Lawrence has a broad range of experience that he’s bringing to the team. After completing his studies at the prestigious Institute of Culinary Art in Stellenbosch, he worked at the equally illustrious Village Hotel on the Spier Wine Estate. He is now based in Johannesburg, where he works at the award-winning Roots Restaurant, north of Johannesburg.

His experience in international cooking competitions includes participating in the Hans Bueschkens Junior Chefs Challenge in New Zealand in 2006, where he was the reserve. In 2007 Lawrence became a junior member of the National Culinary Team.

An experienced chef, Bertus Basson studied in Cape Town, in the Western Cape. After studying, he worked at a variety of restaurants, including the Western Cape Hotel & Spa in Hermanus.

In 2005, along with his business partner Craig Cormack, Basson started his own business, All Things Culinary. Last year, Basson’s dream of owning his own restaurant was realised when he opened Overture, based at the Hidden Valley Wines in Stellenbosch, along the Cape wine route.

He is a senior member of the national team, having won fourth place in the international Swiss competition Chaine des Rotisseurs Jeune Commis in 2002. The competition was established in 1977 to support young, aspirant chefs to hone their skills.

In 2007, he was named the Unilever food solutions senior chef of the year in 2007. He joined Team South Africa in 2003, travelling to the American Culinary Classic in May the same year, where the team won two silver and two bronze medals.

Candice Philip had a unique opportunity to work while simultaneously earning her qualification. She was part of an apprentice programme at the events venue Gallagher Estate, where she spent four years. Two and a half years ago she joined the prestigious Saxon Hotel, where she still currently works.

Like her team mates, Philip’s track record in culinary competitions is excellent. In 2006, she was placed third at the Chaine des Rotisseurs Jeune Commis competition in 2006. The following year was a busy one for Philip, who won a bronze medal in the Mini Plated Salon Culinaire at Hostex, a South African hospitality and catering exhibition. She also took second place in the Sunday Times Chef of the Year and second place in the Unilever foods solutions senior chef of the year.

Perhaps the groups’ most experienced chef, Garth Shnier, is a graduate from the Southern Sun in-house training programme and has worked both locally and internationally, including Germany and the US. He is currently the executive chef at the five-star Michelangelo Hotel.

Shnier has been part of South Africa’s National Culinary Team for 14 years and has represented South Africa in no less than eight international individual and team competitions. He has brought home two gold and several silver medals.

Cape Town-born Dilene Cranna’s entry into the world of cooking happened quite by chance. Not sure what to study, she enrolled in the first programme her finger landed on at Cape Technikon’s yearbook. Although she initially didn’t like the course, she found her passion in pastry. She has been a member of the national team as a pastry specialist since 2005.

No newcomer to culinary competitions, Henrico Grobbelaar also hails from the Cape. Having studied at the South African Culinary Academy in Cape Town, He began his career as a junior chef de partie at Erinvale Estate Hotel, in the Western Cape. He then embarked on an adventure as a senior chef on a private yacht in the USA for six months, which he’s done twice. He is now the owner of Lemon’s Bistro in Somerset West.

In January 2005, Grobbelaar won first place in the National Salon Culinaire competition, this attracted the attention of the selectors of the national team.

Multi-award winning South African chef Jodi-Ann Palmer graduated from Silwood Kitchen, one of South Africa’s oldest culinary training schools. She has vast work experience, where she has worked with her team members Bertus Basson at his eatery, as well as with Garth Shnier on some of his projects.

Her accolades including winning the McCain tribute to good taste at Hostex Cape 2006. In May of that same year, Jodi began work as international new product development and technology chef for Nando’s Chickenland, where she was given free reign to follow her belief.

She then relocated to the US, where she worked at the world-renowned restaurant The French Laundry in California. Jodi is a previous winner of the prestigious Unilever Junior Chef of the Year award.

The team’s newcomer Samantha Montzinger finished her studies in 2004. She then had the opportunity to work with her mentor Jeff Scheuremanns until 2006. She is currently with Fedics, South Africa’s biggest black-owned outsourced catering company, where she is executive chef and catering manager for their national head office.

Described as having a competitive spirit, Montzinger ’s pure dedication, passion and flair stood out to the national team selectors, who chose her to represent South Africa at IKA 2008.

The National Culinary Team (NCT) consists of 11 distinguished chefs who have set themselves head and shoulders above their contemporaries.

For the first time this year, the NCT’s status has been recognised as a South African team.

In recognising the team, the Department of Arts and Culture’s Bureau of Heraldry has now officially registered a coat of arms for the team.

The coat of arms depicts the classic tools of a chefs’ trade – a spoon and a whisk – as well as the chef’s hat and flames. The emblem also boasts South Africa’s national flower.

Beneath the emblem, is a banner with “Masakhane Team SA” inscribed – Masakhane being a Zulu/Xhosa phrase that meaning, “Lets build each other up” or “Stand Together”.