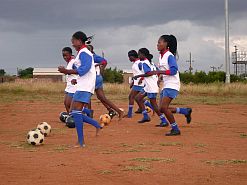 A chance top to learn is the excitement of
the upcoming Fifa World Cup to children in
disadvantage areas of South Africa
(Image: “A chance to play”)

The initiative was launched here in April 2008 after employees of the vehicle manufacturer and aid group identified the need to improve the lives of young South Africans by linking play and sports with learning and training schemes, said coordinator Claudia Berker.

The programme is linked with nine non-governmental organisations working with children in three provinces around South Africa: Limpopo, Gauteng and the Eastern Cape.

“We provide funding for these organisations and they come up with concepts that are adapted to those specific communities’ sports, playing and learning interests and needs,” Berker said.

So far the programme has reached 30 000 children between the ages of four and 20 across the three provinces. In addition, eight community sport fields have been revamped, six recreational centres and playgrounds have been upgraded, and several community crèches have been extended to include play centres with toy libraries and jungle gyms.

At sporting events hosted by “A chance to play”, youngsters receive life skills training, learn about HIV/Aids and how to deal with peer pressure, as well as gain a better understanding of gender relations. Personal development, career guidance and children’s rights are also part of the training.

“We use their experiences when playing to teach them valuable lessons they can use to deal with challenges of everyday lives,” she said.

“Through sport children learn key skills such as team spirit, playing fair, and gain self-confidence. They can work out their frustrations and fears, become more courageous, and feel integrated and accepted as part of a team.”

All children involved in the programme will play in a mini Football World Cup in the June-July school holidays to celebrate the long-awaited Fifa spectacular.

Participants have been split into different groups to mimic the 32 teams in the World Cup, and are being encouraged to learn more about the country and the people they will represent. During the mini tournament they will display their chosen country’s culture and spirit through singing, celebrations and football skills.

“This has really instilled patriotism in the children – not only are they learning about other countries, they are getting to know their own land better as they compare different cultures. They are learning about the significance of this big event being in Africa, and in their country,” said Berker.

Parents of children involved in the programme are thrilled with its results. Before joining some youngsters would roam the streets after school or during school holidays, but now they have engaging sports activities to keep them busy.

Berker said many parents have reported that their relationships with their children have improved, as the programme gives participants a sense of purpose and teaches discipline.

She said parents are relieved that their youngsters are out learning and playing in a safe environment, rather than running the risk of falling into the wrong crowd, getting caught up in crime or being promiscuous.

“This is not just building and giving hope to young people, but also to the communities they live in,” said Berker.