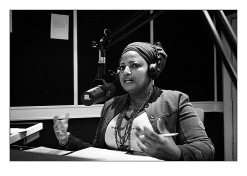 Activist Criselda Kananda is on a month-
long fast to raise awareness of HIV ahead
of World Aids Day.
(Image: Question Everything)

South African media personality and social activist Criselda Kananda has begun a month-long fast to radically increase awareness of the HIV pandemic ahead of World Aids Day on 1 December 2009.

The fast will last from 20 October to 20 November and will see Kananda drinking only water, and praying for two hours a day.

Kananda has garnered a strong South African fan base for her motivational show on national radio station Metro FM, on Wednesday and Thursday evenings.

HIV positive herself, Kananda was diagnosed in 1998 and has since worked to inspire South Africans in the same situation, showing them that despite the virus, a full and fulfilled life is possible.

“I want to bring the ‘I’ back into HIV, because judging by the sexually transmitted infection statistics, the issue is not just about promiscuity but about losing the sense of personal power to a disease,” she said.

According to the national Department of Health more than 4-million people receive treatment for STIs in South Africa every year. The strong association between HIV and other STIs is attributed to multiple sex partners, and not using condoms. The Department of Health is determined to decrease this number by educating people on the importance of using condoms to prevent infection and seeking treatment when infected.

Through her radio show and her work as an inspirational speaker, Kananda calls on HIV-positive South Africans to overcome their fear of seeking help, being judged and condemned, stigmatised and discriminated against.

In the decade since Kananda became an HIV activist, she has lived a healthy, symptom-free and positive life.

She has made it a goal to learn and understand HIV better, studying immunity and Aids progression, and reading the available research on nutrition and behaviour. She has delved into psychoneuroimmunology, the study of the interaction between human psychology and the body’s immune system, and positive living.

Over the years Kananda has gained respect from leaders such as President Jacob Zuma, who said “Criselda gives hope and encouragement to millions”, and former president Nelson Mandela, who described her as “the light for the world to see”.

She has also been lauded for her work as strategic advisor for Zithande, the award-winning governmental HIV and Aids campaign.

Zithande is based on the premise that individuals who love, care for and respect themselves pass on that positivity to others. “HIV has taught me that my health is my responsibility,” said Kananda.

The activist left a successful career in sales and marketing, where she headed the direct marketing business unit of the South African Post Office, to become a wellness advocate.

She has been invited as a speaker and presented papers at many conferences and meetings including a meeting of the Southern African Development Community health ministers on wellness.

She started a radio talk show called Positive Talk in 2003 on local Johannesburg radio station Kaya FM. The show focuses on how HIV and Aids contribute to health, wellness and socioeconomic imbalances.

Kananda now believes the time has come to dedicate all her efforts to powerful action, with the hope that it will prove to be a turning point for the disease.

“I have now reached a point where I am asking for God’s intervention in putting a stop to the spread of HIV on World Aids Day on 1 December,” Kananda said. “I am calling upon South African believers from different denominations to join me as I call upon God’s intervention, because the number of people dying every month is not acceptable.“

A promising face for HIV

Kananda said she strives to look good at all times as she believes that HIV has been given far too negative a face. “For most people being invisible is seen as the best way to cope with the HIV infection,” she said.

She continues to provide hope by educating HIV-positive people on simple ways of living a positive life, encouraging them to adopt a holistic approach to wellness and to focus on a personal revolution.

“To me this means looking after one’s body, mind and soul, being responsible for our own actions and choices. I believe that we need to restore dignity and moral ethics to African people if ever we are to win this human tragedy. And most importantly eradicate poverty and helplessness.”

South Africa has one of the fastest growing HIV epidemics in the world. According to the 2008 South African National HIV Prevalence, HIV Incidence, Behaviour and Communication Survey by the Human Sciences Research Council an estimated 5.2-million people were living with HIV and Aids in 2008. About 250 000 South Africans died of Aids-related illnesses in 2008.

National prevalence is around 11%, with certain age groups being particularly vulnerable. An estimated one in three women between the ages of 25 and 29, and over 25% of men between the ages of 30 and 34, are HIV positive. In South Africa the main mode of HIV transmission is between heterosexual couples, with infection between mother and child being the other main infection route.