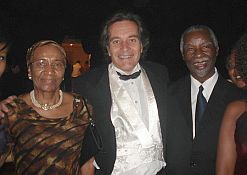 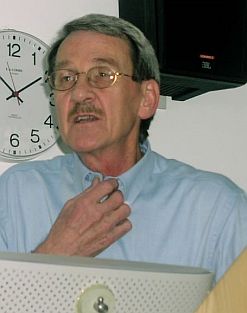 Professor Dewald Roode delivering a
presentation at the London School of
Economics during a seminar on ICT and
globalisation. (Image: LSE)

In a related story, his colleague Professor Johannes Cronjé, Dean of Informatics and Design at the Cape Peninsula University of Technology, was named the top ICT educator in Africa at a ceremony held towards the end of 2008.

Both men have helped to put South Africa on the map in the field of information and communication technology, showing the world that the country remains at the forefront of ICT developments globally.

The roar of success

The Leo Award is bestowed on those who make invaluable contributions at a global level, sustained over the course of their careers, to research, theory development and practice in information systems. Be they academics or professionals, Leo winners are looked upon as role models for the international information systems community.

The award was announced at the International Conference on Information Systems in Paris in December 2008. Nominations for the following year’s honourees are accepted from 1 September each year and can only be made by others – no one may nominate themselves.

Among those who nominated Roode was his colleague Prof Mikko Korpela of the University of Kuopio, Finland. Besides being an eminent postdoctoral researcher at Kuopio University, Korpela is Adjunct Professor in the Faculty of Informatics and Design at the Cape Peninsula University of Technology.

“Roode has championed the interpretive research approach in Africa as an alternative to barren mainstream positivist research,” he said. “He has raised a full generation of 30 new PhD degree holders who are spread throughout South Africa and abroad, and he has been active as one of the key drivers of the world IT forum.”

“I believe that special attention was given to the pioneering work that Professor Roode did,” said Prof John King of the University of Michigan, “in making information systems an important area of study in the southern hemisphere, and bringing that community together with the community north of the equator.”

Roode graduated from Potchefstroom University, now known as the North-West University, with a master’s degree in theoretical physics as well as mathematics. He later switched to the University of Leiden, Netherlands, where he completed his PhD in 1968.

Over the course of his career he has been involved with a number of pioneering institutions, including the then Atomic Energy Board, the former Rand Afrikaans University in Johannesburg, now known as Johannesburg University, Sperry UNIVAC, the Computer Users Council of South Africa, the Council for Scientific and Industrial Research, and Pretoria University.

He retired from academic life in 2001 but still works actively in academic circles as a visiting professor in Cape Town University’s Department of Information, and also at the Cape Peninsula University of Technology. Here he supervises PhD students, conducts research, and writes scientific papers, which are regularly published in international journals.

Roode is a member of AIS, the Association for Computing Machinery, the SA Institute of Computer Scientists and Information Technologists, and a Fellow of the SA Computer Society.

Prof Johannes Cronjé has been recognised as the top educator in ICT on the African continent at the 10th annual African ICT Achievers Awards, held recently in Johannesburg.

Cronjé was lauded for his work over the past 15 years in bringing computers into education. He was pitted against fellow finalists January Timanywa of the Tanzania Institute of Education in Dar es Salaam, and Prof Venansius Baryamureeba of the faculty of Computing and IT at Makerere University in Kampala, Uganda.

At the same ceremony, former president Thabo Mbeki was presented with a lifetime achievement award.

The African ICT Achievers Awards pay tribute to those individuals and companies who have led the field in Africa. Nominations are made by students or peers of those to be honoured.

Cronjé has been a long-standing pioneer in ICT education in South Africa and abroad. A number of his innovations have found their way into the standard practice books in institutions all over the world. In 1997 he opened one of the first internet-based classrooms, and developed the technique of peer teaching, where two students sharing a computer assist each other.

“I also developed methods of teaching students outside regular contact time by using social software sites such as Facebook, LinkedIn, Youtube and Del.icio.us,” he said, adding that he plans to continue with his investigation into the use of mobile phones and Web 2.0 tools, such as Facebook, in education.

As well as being a published author and presenter of hundreds of papers, the academic also offers his services as consultant to various organisations such as the South African Police Service, the national Department of Finance, De Beers, and BHP Billiton.

In addition, Cronjé’s educational website Research Methods Online helps students in research for their postgraduate studies by providing useful tips, tools and essays that will help them as they progress. To date he has guided 150 students to their master’s degrees and 35 of those to doctorates. Four out of the latter group have been awarded professorships.

Cronjé is a member of the English Academy of SA, the Forum for the Advancement of Adult Education, the SA Association for Research and Development in Higher Education, the Southern African Network for Educational Technology and E-Learning, and the Suid-Afrikaanse Akademie vir Wetenskap en Kuns.