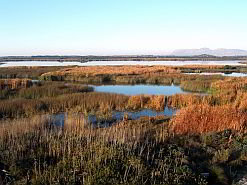 The health and welfare of many people
in the rural areas is closely linked to their
ecosystem. Mthenjwa Mhlongo from Port
Elizabeth is teaching his community the
importance of preserving their water and
rehabilitating their wetlands.
(Image: Flickr)

Growing up in a rural area near Port Elizabeth, Eastern Cape, Mthenjwa Mhlongo spent his days playing in the river, herding cows and learning about herbs from his uncle and grandmother.

Now, as an adult living not too far from his birthplace, he is passionate about the environment and determined to teach his community the importance of preserving their ecosystem.

With the help of the Endangered Wildlife Trust, Mhlongo is involved in showing his community how to rehabilitate and take care of their wetlands and other water resources.

“The health and welfare of many people in the rural areas is closely linked to their ecosystem. The community’s access to water, the state of the water they drink, and where they get if from all play a significant role,” he said.

Mhlongo said wetland areas are essential to the survival of rural people, as they provide clean drinking water and food security during droughts. “These are just some of the many essential benefits that nature provides that are crucial to human health and wellbeing”

To keep on sustaining life, the environment needs to be nurtured, he said. “When the ecosystem becomes ruined, we lose the great services that it supplies to us. Sadly, because of the compound nature of our environment, most of the resources cannot be replaced – even by the latest technology.

Mhlongo said he doesn’t believe communities destroy the environment intentionally, but they lack the knowledge on how to take care and sustain it. “I believe the community wants to do good, they understand the importance of their natural resources and want to take care of them, they just don’t know where to start – they don’t have the information and resources to do that.”

He has started working with his community to clean up rivers and wetlands, and is also visiting schools and teaching pupils to plant trees and other greenery around their classrooms.

He works with the community to identify problems relating to water and looks at possible solutions. This includes coming up with ways of reducing water pollution and recognising the economic benefits of safeguarding water.

“We are making small changes. I’ve been encouraging people to stop using the rivers as dumps, to watch that when they take their animals to drink water they don’t go into the water and defecate, and encouraging women to use buckets when they are doing their washing rather than washing their clothes straight in the river. All these things contaminate the river, making many people who rely on the rivers as their only water source sick.”

Community members have been coming to Mhlongo and sharing ideas on how to improve their lives. Some share their knowledge of the environment and are keen to contribute to the greening programme.

“I don’t have formal education, but I grew up working on farms and have a solid knowledge of the environment and the different things we can do to care for and nurture its resources,” said Mthawelanga Nyawuza.

He said Mhlongo is a great role-model for the community, and has motivated the community to show pride and appreciation for their people and the environment by taking care of water and land.

“It’s great to see the community taking ownership of their environment. People are standing up, making a change and making their lives and their neighbourhood better,” said Mhlongo.

“I grew up playing on rich green grass surrounded by lots of trees and plants. I still enjoy fresh fruits from my grandmother’s trees. I used to swim in clean, flowing rivers. I don’t want to see that die, I want other generations who come after us to also enjoy nature’s luxuries.”