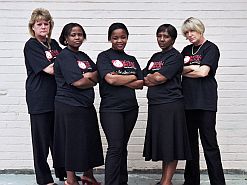 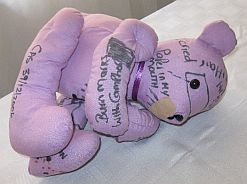 A Bobbi Bear, telling the tale of abuse
in an explicit and visual way.
(Image: Bobbi Bear) 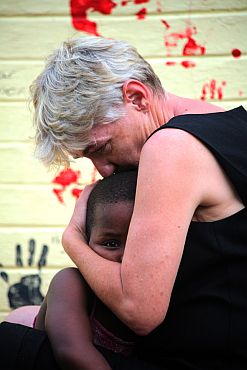 Rough Aunties, a documentary about a group of South African women who work with the police to bring child abusers to book and put young victims on the road to healing, has taken the world by storm, winning a top prize in the 2009 Sundance Film Festival.

The documentary was produced by veteran filmmaker Kim Longinotto, whose previous work includes Divorce Iranian Style, Gaea Girls and Sisters in Law. While Rough Aunties lacks a formal dramatic structure it presents a hard-hitting real-life view of the activities of the women, all of whom are involved with Durban-based child welfare organisation Bobbi Bear.

The film won a Grand Jury prize at this year’s Sundance Film Festival, which was founded in 1978 with Robert Redford as chair. The festival has earned a reputation as a top showcase for new independent films.

The film also screened at the 2008 International Documentary Festival in Amsterdam, to great acclaim.

Rough Aunties follows the work of a group of feisty women over a 10-week period as they take a stand for abused children in Durban, KwaZulu-Natal, conducting harrowing interviews with the young victims, arresting molesters, and finding themselves in the midst of personal tragedy.

The Bobbi Bear organisation was established by Jackie Branfield, originally from Zimbabwe. Herself a victim of abuse as a child, Branfield became an anti-abuse activist some two decades ago when she was approached through her church’s youth group to help those with problems. She realised that helping others was a way to move forward from her own experience, and it wasn’t long before she was counselling abused women and children from many surrounding areas and from as far afield as Johannesburg.

Called to a police station in 1994 to assist with a rape case, Branfield witnessed how the level of communication between a police officer and a victim could have a huge impact on the final outcome, when the case’s young victim was unable to state what she had experienced. There and then Branfield decided to do something about it.

Her challenge was to ensure that accurate information was gathered and clear legal evidence noted without compromising the care and support for the victim. It was necessary to find a means to coax information from children while not adding to their ordeal in any way.

Branfield eventually settled on the beloved teddy bear as a medium through which traumatised youngsters could tell their stories. Children who are unable to voice their experiences use the bears to indicate what their abusers have done to them, by drawing with a marker or placing Band-Aid strips on the parts of their little bodies that were violated.

The bear is part of a kit that Branfield and her crew give to young rape and abuse victims. Children also receive a small pair of panties or underpants, a sanitary pad, tissues, wet wipes, sweets and a cold drink, gloves, a notebook, and a pen and marker. There is another kit for adults, and one for children who need to go into protective care.

At Bobbi Bear Branfield is assisted primarily by Nontando “Studla” Maphumulo, Mildred Ngcobo, Thuli Sibiya and Eureka Olivier. The women and their other colleagues work with one male police officer who helps them track down and arrest abusers.

Rough Aunties painfully highlights the inadequacies of South Africa’s criminal justice system in punishing and incarcerating those who hurt children. The country’s justice system is severely overburdened and there is a tragic tendency to pay scant attention to social issues. Sentences for abusers can be laughably light and in many cases the abuser is simply released back into society.

But organisations such as Bobbi Bear offer care, compassion and hope for victims. Asked how many children they help every year, Sibiya replied, “It’s a difficult question to answer. We are just a bunch of women. Per month, I have 20 cases. We cannot calculate, but it’s a lot. I’m still sitting on cases from as far back as 2002.”

The job demands a great deal of courage and fearlessness. The women have received threats but, as Ngcobo put it, if they don’t do the job nobody else will.

Bobbi Bear is currently trying to raise around R4.1-million (US$400 000) to build a safe house where children can be kept in safety for longer periods, although still on a temporary basis. Information can be found on the website.