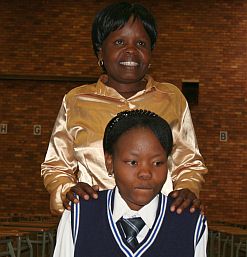 Portia Chidi is proud of her daughter
Rorisang. 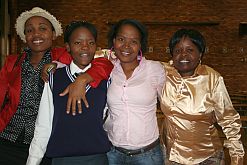 Getting straight A’s in each of her seven
subjects has made Rorisang the pride of
her family and her community. 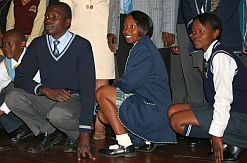 Rorisang Chidi, 18, stays with her family in a zinc shack in Mandela Park – an informal settlement outside Pretoria.

A major challenge in the section of her sprawling neighbourhood is a lack of electricity.

During Chidi’s matric year in 2010, and she would sometimes have to bath in cold water in the mornings before going to school.

She regularly used a paraffin lamp when studying after dark, and when the vital fuel ran out, she had to resort to candles.

“Rorisang studied hard, even though we are without electricity,” said her sister, Ouma Chidi. “Sometimes we would not have paraffin and she would have to go to school after bathing in cold water.”

Her former school, J Kekana Secondary School, is located outside Mandela Park in Mamelodi, a neighbouring township. This means she had to take a taxi to and from school every day.

Her unemployed parents had to fork out a R20 (US$3) taxi fare each day to ensure she got to school. “My three brothers and my father really helped me with getting Rorisang to school,” said her mother, Portia Chidi.

But none of these obstacles could stop Rorisang from achieving top marks in her final school year. The eloquent youngster has been honoured as one of the top achievers in the Gauteng province, receiving a certificate of recognition and a bursary from the provincial government.

Getting straight A’s in each of her seven subjects has made Rorisang the pride of her family and her community. “I’m proud of her. It has been through her hard work that she made it,” said her mother.

Rorisang has secured herself a place at the University of Pretoria where she’ll study for a BCom degree. “I want to become a chartered accountant,” she said.

The bursary she’s received from Gauteng’s Department of Education is worth R40 000 ($5.700). Although it will only help pay for the first academic year, it will certainly come in handy. And if it’s not enough to cover all her study fees and living expenses, her matric marks will put her in a great position to apply for the university’s top achiever bursary. She could use this to supplement her initial grant.

“My matric achievement has secured me a bursary and my future,” Rorisang said.

Rorisang’s mother is delighted about her getting one of the bursaries for top achievers in Gauteng. “If it wasn’t for the bursary my child wouldn’t be able to go to university. I’m really thankful for the bursary,” Portia said.

Sister Ouma is confident that Rorisang will do extremely well at university. “She’s committed to her studies. She’ll now have an advantage because she’ll have electricity at the university,” Ouma said.

“But she must double her efforts.”

Rorisang was one of thousands of pupils who overcame difficulties during a prolonged public servants strike in 2010, which left many public schools without teachers for two weeks.

The Department of Education’s decision that schools be closed for five weeks during the month-long Fifa World Cup didn’t help matters either.

But many youngsters took the initiative to set up their own study groups to work through and revise the syllabus. Rorisang and her group of friends were among this dedicated bunch.

A study camp arranged by the Department of Education also helped her prepare for the final exams. The department organised camps from September until the start of exams in November to make up for lost time during the strike and World Cup.

Rorisang has an encouraging message to fellow pupils from disadvantaged backgrounds: “There’s nothing that pays more than hard work. No matter what circumstances you face, you can overcome your challenges through hard work.” 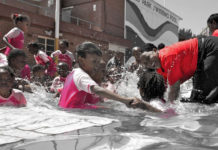