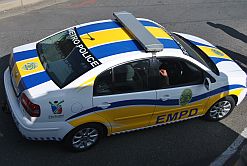 Traffic police are out in numbers to crack
violations during the December holidays.
(Image: Bongani Nkosi)

Traffic officers have inspected more than 2-million vehicles on South Africa’s roads in the last two months, and they have a challenge to up their efforts throughout December 2010.

The Department of Transport has resolved to stop and search no less than a million cars and drivers in a bid to curb traffic violations and carnage on the country’s roads this festive season.

South Africa records about 16 000 deaths from car accidents each year, according to the department, with the holiday periods in December and over Easter claiming the greatest number of lives.

Officers have therefore intensified operations as part of the Make Roads Safe campaign, which the department launched in November.

Over the last two months officials have also issued more than 500 000 fines across the country for various traffic offences.

“As we head towards the December holidays, traffic enforcement will be intensified and absolutely no mercy will be shown to road users who break the rules,” Minister of Transport S’bu Ndebele said in a statement issued recently.

There’s a strong focus on drunk driving, which results in immediate arrest. More than 2 200 such offenders were arrested in October for driving while under the influence, the department said.

Unroadworthy vehicles will be taken off the road as a precautionary measure.

Traffic officers have been assigned to conduct unannounced blitzes to crack down on reckless drivers, said the department.

“We call upon road users to ensure vehicle and driver fitness, drive with their head lamps on at all times, wear your seatbelts, do not drink and drive and adhere to the prescribed speed limits,” said Ndebele.

“Pedestrians and cyclists must wear bright clothes at all times when using the roads.”

The department has long identified fatigue as one of the root causes of accidents, and urges motorists to rest every 200km.

Part of the department’s clampdown is the Administrative Adjudication of Road Traffic Offences (Aarto) demerit system, which it hopes to introduce in the near future. It had planned to implement the system earlier in 2010, but opposition from different organisations has caused delays.

Motorists will be suspended from driving for three months if they accumulate 12 demerits for breaking traffic rules, according to the Aarto regulations, which have been approved by parliament.

If a motorist’s licence is suspended three times, he or she will be banned from driving indefinitely.

Certain taxi drivers and the South African Transport and Allied Workers Union are heavily opposed to the system, as they fear it could result in job losses.

The department has resolved to extend consultation with opposing bodies before implementing Aarto, which it believes will inspire responsible driving habits.