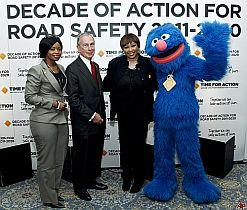 Zoleka Mandela, the mother of Zenani,
New York City mayor Michael Bloomberg
and Zindzi Mandela pose with the
character Grover, from Sesame Street.
The blue creature is the ambassador for
the UN’s Decade of Action for Road Safety. 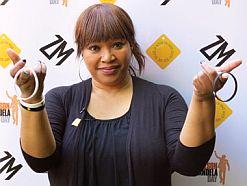 Zindzi shows off the bangles that
can be bought in support of the
Zenani Campaign, with proceeds
from sales going towards injury
prevention programmes by the
Road Safety Fund.
(Images: The Road Safety Fund)

The memory of Nelson Mandela’s great-granddaughter Zenani Mandela will live on forever and, with a new campaign recently named in her honour, will help to bring down the number of road fatalities involving children around the world.

The Zenani Campaign was launched on 2 May 2012 in New York, by her mother Zoleka and grandmother, Mandela’s third daughter Zindzi.

The city’s mayor Michael Bloomberg hosted a South African delegation including South Africa’s minister of transport, Sibusiso Ndebele, among others. The event was used to highlight the plight of traffic authorities globally who have the task of curbing road deaths.

Zenani died in a car accident on the night of 10 June 2010 while travelling home with relatives after attending a concert that kick-started the Fifa World Cup in Johannesburg. She had just turned 13 two days before.

Aims of the campaign

The campaign will fall under the UN Decade of Action for Road Safety initiative, which aims to improve the level of protection for children on roads mainly in developing countries.

Among other goals, the UN campaign seeks to secure investment in safe footpaths, cycle-ways and crossing points on streets with lower speed limits, particularly around schools. It also aims to help implement new road legislation where required and encourage a bolder approach to road traffic law enforcement.

Zenani will also be incorporated into the Mandela Day celebrations on 18 July 2012. On this day the world honours the Nobel Peace Prize laureate, and the event calls on everybody to tap into and realise the power they have to make a positive change in their communities around the globe.

Speaking at the Zenani launch, Zindzi Mandela said: “I used to think that road casualties were just a tragic fact of life, about which nothing could be done.

“Demand protection for children on the roads, and let us ensure that in future, other families do not have to suffer the pain that my family has suffered.”

“Other parents must not go through the pain that I am suffering and will continue to suffer. Every life we save will be a precious victory,” she said.

“Every year almost 1.3-million people are killed and millions more injured on the world’s roads – and many of those victims are children. That is simply unacceptable,” said Bloomberg.

“There’s a strong and growing network of organisations working around the world to implement proven interventions including tougher speeding, seat-belt and helmet rules and an increase in safe school crossings and more footpaths.”

The campaign, he said, was another positive step forward in the global effort to address this issue and save lives.

According to Unicef’s State of the World’s Children 2012 report, road traffic injuries claim a disproportionate number of young lives in low and middle income countries.

It is common for high speed roads to be routed close to schools or through residential areas, and therefore cities must be designed in a way that reduces risk to youngsters.

Pedestrians are a priority

Ndebele spoke about the potential benefit of the initiative for pedestrians.

“Pedestrians alone account for nearly 40% of road fatalities in our country annually,” he said.

He added that at the current rate, road crashes would be the number one killer of children aged between five and 14 in Africa by 2015, overtaking malaria and HIV.

To curb this, the Department of Transport launched the Think Pedestrian campaign in April with the aim of stabilising and reducing road incidents by educating drivers and pedestrians about road safety.

Driven globally by the UN, in South Africa the campaign is endorsed by logistics company Eqstra and the Nelson Mandela Centre of Memory, in support of Mandela Day.

Campbell, who is close to the Mandela family, said: “There are far too many children being killed, a thousand every day. The family will never get over the pain of her loss, and we’ll never get Zenani back.

“But she was such a positive little girl that she would have wanted to make a difference. In memory of Zenani Mandela, I support this campaign. Lives can be saved, and we need action right now.”

Hamilton said that he supports the campaign because action is needed now to prevent more tragedies.

How to get involved

To get involved in the campaign one can become the eyes, ears and voice of the campaign by taking photos of unsafe streets and uploading them on the Make Roads Safe website.

Supporters can also buy the Zenani wristband via the website, to show their solidarity with all victims of road crashes.

All proceeds will be used to support road safety projects protecting children in developing countries.