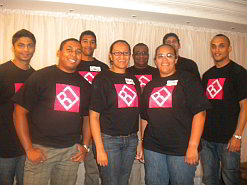 Many of the RLabs team come from
disadvantaged backgrounds. 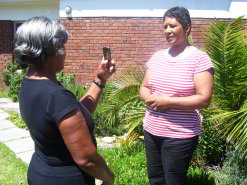 Through the Mom 2.0 and 3.0 courses,
women in the community learn to use
technology.
(Images: RLabs on Flickr)

RELATED ARTICLES
• JamiiX: from the Cape Flats to the world
• Low-cost phones for Africa
• Skills via phones for rural women
• Fight HIV with your phone
• Mobile internet booms in South Africa

In the category of best use of mobile social media, developer RLabs’ mobile drug counselling application was up against the brpr Group for its work with Smirnoff Ice, and Leo Burnett Frankfurt for its Fiat Punto Evo challenge. The Smirnoff application took top honours.

“To be a finalist for this award is such a great honour and privilege,” wrote RLabs founder Marlon Parker on his blog, “as about 74% of the entries were from large brands coming from 21 countries.”

Parker added that the non-profit RLabs is encouraged by the recognition from the international social media community, and will continue to innovate by using social media to bring about social change.

RLabs operates with a mission to impact, empower and reconstruct global communities through innovation.

Situated in Athlone in the Western Cape, Rlabs tackles the rampant drug use and trade as well as gangster-related violence that have resulted in severe economic and educational challenges for the Cape Flats community.

Based at the Impact Centre in Athlone, RLabs also advises companies and other organisations on social media strategy.

The project was born in 2007 when ten young residents of the area decided to change their lives and obtain an education at a time when use of methamphetamine (known in the area as tik) was rife.

The men went to the Impact Centre, a community centre in Athlone which offered programmes such as feeding schemes, support and counselling and a seniors’ wellness program.

There was no availability at the centre at the time for their rehabilitation, but the director was moved to start a programme called Reconstructed which offered them training and mentoring, as well as motivational talks and lessons in basic responsibility.

The director then brought Parker, an IT lecturer at the Cape Peninsula University of Technology, on board to teach them computer skills. When asked what they knew about computers one student stated: “I know how to steal one.”

Their experiences were taken online in the form of the Reconstructed.com blog, which later became Reconstructed Living Lab, or RLabs. Through the use of the blog, Facebook and Twitter they gained a large following and used the social media platforms to encourage and empower other youngsters who were in similar situations and wanted to get out.

In order to give more people access to much-needed counselling, and recognising that most people have a mobile phone even if they can’t afford much else, RLabs developed JamiiX, an aggregator that combines instant messaging with social media in one application. JamiiX can be used on a computer or mobile phone.

RLabs’ Drug Advice Support (DAS) service, which was started to address the drug addiction problem in the Western Cape, is available on JamiiX. DAS is a place where those in need can get help on questions related to drugs, HIV, relationships, and abuse. It also offers a suicide help line, a place of safety and immediate assistance in a crisis.

The system allows a counsellor to transfer a person’s entire history to a colleague, and still retain confidentiality. Over 100 000 South Africans currently use the system, as well as many international users.

JamiiX has partnered with South African success story MXit to make its interface available through a special gateway on the popular instant messaging application.

With an average of 20 000 messages exchanged every hour, 250-300 users assisted in that time, and 5% of online conversations receiving offline referrals. JamiiX is known as “the contact centre on the go”.

“What really excites us is when we hear stories of people whose lives are being changed because of the members of the community who offer their time to help those in need,” said Parker. “Well done to all at RLabs for the amazing work you are doing and we celebrate with you and the rest of the online community through the Bees Awards finalist nomination dedicated to you.”

Besides RLabs and JamiiX, the other main activity at the Impact Centre is Impact Direct, a community- based organisation. Formerly funded by the government, Impact Direct now relies on donations of all kinds, as well as income from wellness sessions, to maintain its operations.

The organisation has adopted the local Kewtown primary school, which accommodates about 400 pupils and is at the heart of the gang wars. Programmes help children to learn basic manners, social skills, and hygiene. They receive a meal, help with homework, and support and counselling where needed. As many children as possible receive one new uniform.

Counsellors also make house calls, as many children have no parents and battle with overcrowding in a limited amount of space. The children thank their teachers by holding an annual wellness day on which each teacher is pampered and given a little gift.

The Moms 3.0 program and Social Media for Teens are a couple of the many programmes offered by the Impact Centre and Rlabs. Others include projects that assist newcomers to technology, such as the elderly, on an individual level.

There is also a dedicated pampering day for the elderly of the community, which focuses on keeping their minds active through arts and crafts. The Seniors Mobile Sessions teaches them to use mobile phones efficiently and send text messages and “please call me” requests, and covers the use of the internet to find all kinds of information, from recipes to growing plants.

Last year technology corporation Dell Inc. sponsored 14 computers for use in the lab – youngsters and adults are able to log in to them via their desktop computers or mobile phones.

RLabs’ Social Media Factory holds sessions in public places such as shopping centres. Each session lasts about ten minutes per person, helping them to set up email, use social media, find a car online and even start a business. This innovation prompted the World Bank to invite RLabs to be the official social media partner at its Innovation Fair held in Sea Point, Cape Town, in April.

RLabs operates in Portugal and Malaysia as well as South Africa, while JamiiX has been launched in South Africa, Finland and the UK.

The organisation has initiated its first social franchise, which encompasses the business model, support, branding, and more, in Porto, Portugal. A local franchise in Khayalitsha, also on the Cape Flats, rolled out at the end of October. 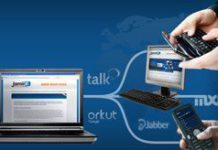