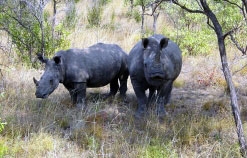 White rhino (Ceratotherium simum) in
the Kruger National Park  The South
African government is planning to clamp
down heavily on wildlife poachers, and
especially those who kill rhino.
(Image: Wikimedia Commons)

Minister of Environmental Affairs Buyelwa Sonjica delivered the keynote address at the Rhino Summit, which was held at the Reserve Bank’s conference centre in Pretoria on 5 and 6 October.

The summit’s aim was to address the tragic surge in rhino poaching incidents that has rocked Southern Africa in the last few months.

Sonjica reaffirmed her department’s commitment to eradicating rhino poaching, and also mentioned planned future talks between South Africa and Far East countries including Vietnam, China and Japan, to discuss ways in which to bring the illegal wildlife trade in those regions under control.

The summit, which was also intended as a review of the effectiveness of current anti-poaching efforts, forms part of the implementation of the so-called Strategy for the Safety and Security of Rhinoceros Populations in South Africa.

“It is indeed a great honour and a privilege for me to address you at this important event in the history of conservation in our country,” said Sonjica in her speech.

“I’m standing here with mixed feelings – of excitement and sadness – given the context of the issues that have prompted this gathering. I’m sad because the country’s proud track record on rhino conservation is being undermined by the senseless killing of rhino and its associated Illegal wildlife trafficking.

“On the other hand, I’m excited to note that the country is united in its resolve to fight this unfortunate scourge and that tremendous progress is being made from all fronts to ensure that South Africa remains a beacon of hope in conservation management.

“South Africa is recognised internationally as a significant role player in rhino conservation because we currently have a proud track record of conserving more rhino than any other country. We are also playing a major role in helping other countries to re-establish their rhino populations.

“The net annual growth rate of the white rhino population in South Africa is 6.6%. South Africa currently has a population of approximately 19 000 white rhino and 1 750 black rhino. From that picture, it is evident that we have made tremendous strides in rhino conservation, especially white rhino.

“Unfortunately the rhino population in South Africa is now being threatened by an upsurge in the illegal killing of rhinos and the leakage of illegally obtained rhino horn stocks into the international illegal trade.

“Throughout the years there have been successful breakthroughs in rhino poaching investigations by the many law enforcement agencies in South Africa. However from 2008 onwards rhino poaching has escalated at an alarming rate, as has the leakage of both legal and illegal rhino horns held in the various private and government stockpiles with no indication of decreasing.”

Sonjica informed the audience that to date, 227 rhinos had been illegally killed on South African soil since the beginning of the year, and that should this trend continue, over 300 animals will have met an unnecessary death by the end of 2010.

“The Department of Environmental Affairs is aware that only a well-coordinated effort by all law enforcement agencies in South Africa will make an impact on the illegal killing of the rhinos. The department developed and implemented various initiatives over the last two years to address this concerning scourge and its subsequent trade in illegally obtained rhinoceros horns.

“Among other actions, these interventions include:

“Ladies and gentlemen, the establishment of the interim NWCRU is aimed at responding to the current spate of wildlife crimes and more specifically the upsurge of rhino poaching and smuggling of rhino horn.

“This unit is driven by the Department of Environmental Affairs, with the South African National Parks leading its coordination on behalf of the Department. The NWCRU will, among others, react immediately when a serious wildlife crime has been committed and be able to detect and investigate smuggling of wildlife and wildlife products.

Sonjica said that the South African Police Service (SAPS) has deployed a dedicated endangered species coordinator in each province, and that an elite team of the SAPS Hawks will focus on rhino poaching related activities around the country.

The Hawks, also known as the Directorate for Priority Crime Investigation, are a special branch of the SAPS which arose from the now-defunct – and highly successful – Directorate for Special Operations, or Scorpions.

“We are happy with the cooperation from the National Prosecution Authorities who have designated prosecutors in province and nationally to deal with organised environmental crime matters,” said Sonjica.

“Owing to the increase in rhino poaching, we now have the Strategy for the Safety and Security of Rhinoceros Populations in South Africa. This strategy is aimed at providing us with guiding principles to inform decision-making processes, strategic planning and operations aimed at reducing the effects of poaching on rhino species and to ensure the successful arrest, conviction and sentencing of poachers, illegal traders and crime syndicates operating locally at park level, regionally, nationally and internationally. Although we are tackling this challenge locally, we are also taking our efforts beyond our country’s borders.

“We are engaging our Southern African Development Community (SADC) partners on a regular basis through the SADC Rhino and Elephant Security Group which meets annually to discuss issues related to the safety and security of rhinos and elephants in the region.

“The Rhino Management Group which consists of countries in the region is another important establishment which facilitates the implementation of the SADC Regional Rhino Strategy. We believe that working together with our counterparts in the region is the only way to collectively deal with this scourge since these marauding bandits have no respect for any political boundaries.

“Also as part of our international engagement programme, I am happy to announce that we are also planning a bilateral visit to Vietnam to discuss issues of concern regarding the smuggling of rhino horn and the legal export of sport hunted white rhino trophies. The Department of Environmental Affairs is also in consultation with the Department of International Relations and Cooperation on bilateral engagements with China and Japan on wildlife law enforcement, capacity building, and improved technology to aid in detection of illegally traded wildlife products.

“The efforts of Lead SA, Jacaranda FM, conservation NGOs and others to highlight the problem, fundraise or raise awareness to the general public symbolised that the collaborative strength of public private partnership can overcome any challenge. We should strengthen our partnerships in addressing this scourge and other similar challenges.

“I must hasten to add that it is my expectation that this summit will augment the current initiatives against rhino poaching. It should afford stakeholders an opportunity to reflect on the current interventions and harness further political and broader stakeholder commitment.

“In its deliberations, the summit should consider to the following:

“I am expecting robust engagements that are constructive and useful to take us another level. We must come out of this summit with answers to the following questions:

“Basically, we need to ascertain if there are any challenges with the regulatory, strategic and operational machinery and if so what needs to be reviewed?

“South Africa’s biodiversity belongs to all South Africans. Government mainly assumes the legal mandate to protect biodiversity, but protection of our rich flora and fauna for current and future generations is the business of every patriotic citizen not just government.

“It is also my pleasure to announce that the interim NWCIU would as of today, officially start operating. Allow me as well to officially launch the Strategy for the Safety and Security of Rhinoceros Populations in South Africa by handing over a copy to Nosipho Ngcaba.

“Ladies and gentlemen, I wish all a fruitful engagement as part of a collaborative efforts to address this challenge before it is too late.