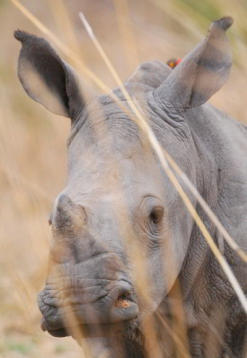 This beautiful baby may one day find itself in need of the rhino ambulance – a rapid response vehicle that can offer on-site medical treatment and then take small traumatised animals to the Rhino Orphanage in Limpopo for special care.
(Image: Luke Harwood) 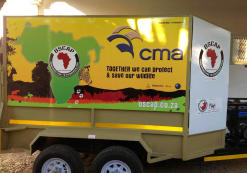 The Rhino Orphanage, opened in August 2012, has added a new weapon to its arsenal in the fight against rhino poaching – the world’s first bespoke baby rhino ambulance.

The orphanage is the first specialist, dedicated, non-commercial centre in the world to care for baby rhinos orphaned by the trade in poached rhino horns. It is located at the Entabeni Safari Conservancy in Limpopo Province, near the city of Mokopane, about 250km north of Pretoria.

The ambulance was donated by the Canadian Medical Association and comes with a trailer to carry vital equipment into the bush and a specialised transporter to carry tiny injured calves back to the orphanage where they can receive medical attention around the clock.

The trailer and transporter have been donated by Arnold Chatz Motors. These extra facilities are intended to provide on-site medical care, enabling vets to give specialised care to rhinos attacked by poachers. The vehicles also bring medical supplies to the Rhino Orphanage for the animals in its care.

The facilities are supported by donations from Oscap (Outraged South African Citizens Against Poaching), Platinum Trailers, Practical Publishing and Robbie Fuchs of World Signs. Oscap member Allison Thompson says that the orphanage, which is run by Arrie van Deventer, is doing pioneering work and has already made an impact in just a few months since opening.

It is an important element in the Rhino Response Strategy National Rescue and Response network, a group of sanctuaries and a non-profit charity that works to rehabilitate rhino and release them back into the wild. The network aims to put in place a rapid intervention and co-ordinated rescue response system which seeks to raise the success ratio of the rescue of poaching orphans. It aims to do this by implementing appropriate handling, rearing and rehabilitation protocols.

Helping the most vulnerable rhino

The latest moves come after what Oscap has called a sudden boom in so-called “calf rescue” projects that are believed to exploit calves as a way to generate funding without the intention to release them back into the wild. This leads to problems as the animals age, as they become overly tame.

There are four calves at the Rhino Orphanage, the most recent of which is Ntombi, rescued in January when it was just two months old. The calf’s mother was killed by poachers. Ntombi had received near fatal head injuries that had penetrated its skull and damaged its sinus cavity. But after constant care, Ntombi has healed and is being rehabilitated to be released back into the wild.

This is only one example of the damage caused by poaching and the illegal trade in rhino horn. The Rhino Response Strategy National Rescue and Response network not only focuses on the rehabilitation of injured rhino, but also on the prevention of poaching. It trains trackers to track and apprehend poachers so that they can be prosecuted.

With the orphanage and the ambulance, Van Deventer and his team, including rhino rearing and rehabilitation expert Karen Trendler, manger of the Rhino Orphanage, can now work around the clock to help save the country’s rhino population. The ambulance is part of the response network’s emergency field response team, ensuring immediate medical attention. This gives an injured rhino the best chance of survival.

South Africa is home to 90% of the world’s rhino population. It is plagued by poaching, following a steep uptick in the illegal trade of rhino horn. According to the Wildlife and Environment Society of South Africa, which tracks poaching, 446 rhino had been poached in South Africa in the year so far to 26 June.