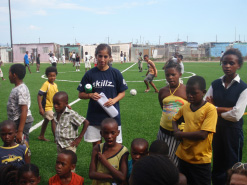 The recent South African Democratic
Teachers Union festival aimed to bring
back a love of sport in schools.
(Image: worldcupcsr.wordpress.com)

The South African Teachers Union (Sadtu) recently held a three-day national festival in Bloemfontein, which offered training for school teachers who are determined to bring back a love of sport in the country’s schools.

Sadtu media officer Nomusa Ncembi said the union is deeply concerned about the current lack of physical activity in schools. It’s hoping that through this event it can inculcate a passion for sport among teachers who will take it back to their students.

The festival, which ran from 7 to 10 October 2009, attracted close to 1 100 teachers and 100 Sadtu officials from all nine provinces. They competed in various sporting codes such as soccer, rugby, netball, volleyball, tennis, table tennis, pool, softball and chess.

Lebogang Sithole, a Johannesburg teacher who competed in volleyball at the festival, said he had learned a lot and planned to take what he could back to his school.

“We don’t always have the resources and training to teach sport at school, but by being at this festival we have learnt a lot from each other, and are motivated to go back and use the knowledge and the resources that we have to teach and ignite the passion of sport in our learners,” he said.

Sadtu general secretary Mugwena Maluleke said the union believes sport, art, and culture are crucial to learner development and should not be treated as extracurricular activities.

“For Sadtu sport is not only for fun, entertainment and competition, but it is one of the most effective unifiers of people of different races, cultures, sex and creed. We also see sport as one of the best promoters of health and wellness,” he said.

Over the past few years there has been a slow decline in the number of schoolchildren taking part in school sport, and the union wants to re-emphasise the need for sport to be taken seriously at schools, and treated like any other subject, he added.

“We therefore call upon the Department of Education to provide sporting facilities, trained personnel and time to engage in sport in schools – more especially in rural areas,” Maluleke said.

Although the Department of Sport and Recreation (SRSA) and the Department of Education state that every school should have a compulsory physical education period of at least 45 minutes per week and offer at least two different sporting activities, many schools say they cannot do this as they lack resources and suitably trained teachers.

To get around this, the departments advise poorly equipped schools to make use of facilities at a nearby community centre or team up with a neighboring school. For example if one offers netball, and the other cricket, a partnership will enable learners to participate in both.

“There is ample evidence to show that participation in physical activity has significant advantages. Besides the obvious benefits to health, it is shown that participation in sport can contribute to improved academic performance, as well as to an improved self-image and sense of general well-being,” said Department of Education director general Duncan Hindle.

He added that his department, together with SRSA, views school sport as an important vehicle for promoting social cohesion and transformation.

“We believe that if all schools were to offer a comprehensive programme of curricular and extra-curricular physical activities, we would see a dramatic decline in the incidences of risky behaviour, including substance abuse, sexual activities and crime. Sport channels the enormous energies of our youth in positive directions.”

Vernon Petersen, SRSA director general, believes a well-organised and planned programme of school sport, including physical education during the school day, should facilitate the creation of safe and caring schools, and allow for quality teaching and learning.

“The starting point is to ensure that besides the compulsory programme of physical education, every school introduces at least two sporting codes for each school term – for both boys and girls. These may be for recreational purposes, aimed at mass participation, as well as for more competitive purposes, involving events with other schools.”

Petersen added that through such sport activities, key values of hard work, respect for authority and team loyalty can be developed.

“To win and yet be modest; to lose but with dignity – these are some of the most important lessons of life, and they are best learnt on the sports field,” he said.