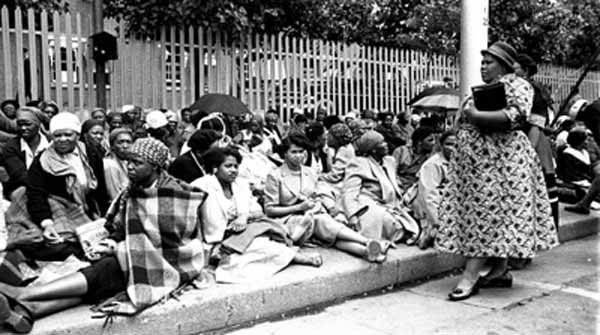 • Celebrating 60 years of the Women’s Charter
• Mandela: a champion for women’s rights
• The strength of South Africa’s democracy
• The Union Buildings: now a national treasure
• Women in the struggle remembered

South Africans celebrate Women’s Month by commemorating the 20 000 brave women who marched on the Union Buildings in Pretoria in 1956 protesting the apartheid pass laws being extended to black women.

The crowd marched to Pretoria to deliver to then-Prime Minister JG Strijdom a petition protesting their freedom being restricted by the passes.

Organised by the Federation of South African Women (Fedsaw), the march was led by Helen Joseph, Rahima Moosa, Sophie Williams and Lilian Ngoyi.

Among those incredible women of all races and ages, from all walks of life, was Amina Cachalia. Cachalia (28 June 1930 – 31 January 2013) was a South African anti-apartheid activist, women’s rights activist, and politician.

She was married to political activist Yusuf Cachalia and was also a long-time friend and ally of former president of South Africa, Nelson Mandela.

Born Amina Asvat in Vereeniging, South Africa, she began campaigning against apartheid and racial discrimination as a teenager and went on to become a women’s rights activist. She spent some 15 years under house arrest throughout the 60s and 70s because of her anti-apartheid activities.

Memories of the Women’s March

Before her passing last year, Cachalia spoke about the day with a broad smile and says that, for her, it was, “a significant day and a day remembered every year and all year”.

“It was a truly splendid day, weather-wise not so great – it was a cold winter’s morning.

“We planned it [the protest] for quite a few months ahead. The executives of the Federation of South African Women took it upon themselves and organised this demonstration and march.”

She recalled that the organisers faced many obstacles. As public gatherings were out of the question, it was decided that every women would get an individual petition as they arrived at the Union Buildings. These petitions were to indicate why the women were going to Pretoria.

Cachalia, who was heavily pregnant at the time, was advised by doctors not to march because of a heart condition. So instead she was taken by car to Pretoria early that morning. She recalled that she waited in the clock tower and then, suddenly, a group of women wearing colourful blankets came into view and walked to the amphitheatre, where they sat on the grass, silently.

“It was a wonderful sight; it meant that the women were coming,” she said.

After leaving the petitions at the door, on windowsills and in the passageway of the minister’s empty office, Ngoyi said that the minister had run away, Cachalia recounted, with a laugh. During the march, Ngoyi led the women in a song, the words – “Wathint’Abafazi Wathint’imbokodo”, meaning “You strike a woman, you strike a rock” – now an infamous reminder of their strength as the bedrock of their families and communities.

The women stayed at the Union Buildings for about an hour or so before quietly retiring.

“There were no police difficulty and there were no incidences of violence. Everything went off absolutely beautifully,” Cachalia said.

The 1956 Women’s March was a culmination of several years of defiance and activism.

South African History Online explains: “In 1952, the Native Laws Amendment Act tightened influx control, making it an offence for any African (including women) to be in any urban area for more than 72 hours unless in possession of the necessary documentation. The only women who could live legally in the townships were the wives and unmarried daughters of the African men who were eligible for permanent residence.”

In that same year, the Abolition of Passes and Co-ordination of Documents Act was passed. Under this act, the many different documents black men had been required to carry were replaced by a single one – the reference book – that gave details of the holder’s identity, employment, place of legal residence, payment of taxes and permission to be in the urban areas.

The act further made it clear that black women would, for the first time, be required to carry reference books. This outraged South African women and posed a threat to their freedom of movement. It added fuel to the anti-pass campaign.

During one of the protests, Dora Tamana, a member of the African National Congress Women’s League (ANCWL) and later a founding member of Fedsaw, said: “We women will never carry these passes. This is something that touches my heart. I appeal to young Africans to come forward and fight. These passes make the road even narrower for us.

“We have seen unemployment, lack of accommodation and families broken because of passes. We have seen it with our men. Who will look after our children when we go to jail for a small technical offence – not having a pass?”

Tamana (née Ntloko) was born in 1901 in Hlobo, Transkei. She married John Tamana, who had been injured in the Bulhoek Massacre. The Tamana family had to move to Cape Town where they rented a converted stable in District Six.

After parting ways with her husband, Tamana got involved in the politics of the region when the government wanted to clear and re-house squatters living in Blouvlei.

The meeting held by the Blouvlei community was attended by over 500 residents and addressed by a number of leading Communist Party members. In 1942, the Communist Party of South Africa (CPSA) became the first of many organisations that Tamana joined, ostensibly because of the threat to her home.

Over the next few years Tamana became increasing drawn into political activity, becoming an executive member of the Cape Town Women’s Food Committee and a member of the ANC.

In June 1952, a co-operative group known as the Defiance Campaign exerted pressure on the government through radical acts of defiance. Women were prominent in conducting these acts, notes South African History Online.

One of these women was Fatima Meer. Meer was arrested for her defiant behaviour along with Ngoyi, who later became president of the ANCWL and Fedsaw.

In 1946, Meer joined many other South African Indians in a passive resistance campaign against apartheid. It was at this time that she started the Student Passive Resistance Committee and helped establish the Durban District Women’s League, an organisation to build alliances between Africans and Indians after riots between the two race groups in 1949.

After the National Party gained power in 1948 and started implementing its apartheid policies, Meer’s activism stepped up; she was one of the founding members of Fedsaw.

Fedsaw was launched on 17 April 1954 in the Trades Hall on Rissik Street, in central Johannesburg. It was the first attempt at establishing a national, broad-based women’s organisation. A group of 146 delegates, representing 230 000 women from across the country, attended the inaugural conference to pledge their support.

Fedsaw aimed to bring South African women together to secure equal opportunities regardless of race and colour and to remove social, legal and economic disabilities.

According to South African History Online, a draft Women’s Charter was presented and called for the enfranchisement of men and women of all races; for equality in employment opportunities; for equal pay for equal work; for rights in relation to property, marriage and children; and for the removal of all laws and customs that denied women such equality.

These demands were later incorporated into the Freedom Charter, adopted by the Congress of the People in Kliptown, Soweto, on 25 and 26 June 1955.

In the run up to the Kliptown gathering, in August 1954, the Congress Alliance asked Fedsaw to help organise the Congress of the People and the women agreed. They successfully helped to organise local bodies and conferences in 1955 and lobbied for the incorporation of some of their demands into the Freedom Charter.

In September 1955, the issue of passes came to a head after the government announced that it would start issuing the reference books to black women from January 1956. Several protests were held, culminating in the mass march to Pretoria in August. In commemoration of the bravery of these women, and in tribute to them, the country now celebrates National Women’s Day each year on 9 August.