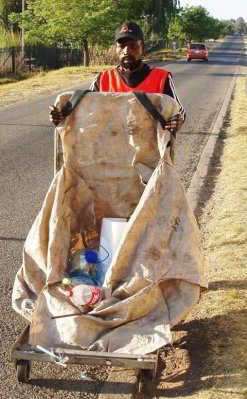 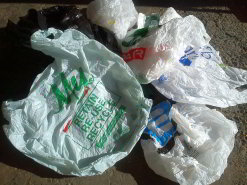 The survey revealed that 29% of all South
Africa’s plastic packaging is recycled.
(Image: Shamin Chibba)

The plastic recycling industry is having a positive impact on job creation in the country, according to a recent announcement by the South African Plastic Recycling Organisation (Sapro).

The claim was made in Sapro’s first annual plastics recycling survey, which was conducted in collaboration with the South African Plastics Federation and released in July 2011. The study covers a four-year period to the end of 2009.

Among a host of findings, the survey indicated that the recycling industry is now responsible for more than 39 000 workers.

According to Sapro general manager Annabe Pretorius, recyclers employ as many as 4 800 workers directly and a further 35 000 indirectly. This brings the industry’s annual payroll to R250-million (US$32-million).

She explained that indirect jobs include the self-employed informal collectors who pick, sort and pack the plastics, as well as the drivers who transport the recyclable materials.

Surveyors interviewed 193 recycling manufacturers around the country and visited up to 175 sites.

“The bulk of the survey was done in the greater Gauteng, KwaZulu-Natal and Western Cape areas,” said Pretorius.

According to the survey, the public’s attitude towards recycling has changed for the better over the years, with more people wanting to be involved.

Researchers recorded a 32% increase in the volume of plastic recycled between 2005 and 2009.

Pretorius said environmental awareness is greatest among the middle and upper classes of South Africa.

However, this does not mean the lower income groups are oblivious to recycling trends. Pretorius said this group re-uses materials such as plastic shopping and rubbish bags that are discarded by higher earning consumers.

One of the major drives hosted by the industry is Clean up South Africa Week, which took place in September 2011 and encouraged people to clean up public spaces.

She said approximately 1 000 people cleaned up beaches along the country’s coastline.

Rory Murray, marketing director of recycled refuse bags manufacturer Tuffy Brands, said consumers can do their bit by choosing products that are recycled from a high percentage of “post-consumer” waste.

Such products contain materials that were thrown away after being used, taken out of the environment by recyclers and subsequently recycled to be used again.

“We physically take out of the environment and reuse it, so essentially it’s cutting down on rubbish that ends up in a landfill site,” Murray said.

He added that consumers can check the labels of the products they buy to make sure they have been recycled from high percentage post-consumer waste.

Murray added that consumers should be wary of products claiming to be 100% recycled as they are actually taken from “pre-consumer” waste. This is waste which is not taken out of the environment. He said this procedure does not make a difference to the preservation of the planet.

During the survey period, 165 772 tons or 29% of all plastic packaging was recycled. Almost 50% of the recyclable materials were obtained from post-consumer sources such as landfills.

These statistics indicate that South Africa’s recycling market is well developed. “At 18%, our country’s mechanical recycling rate is the highest in the world,” said Pretorius.

Mechanical recycling is when a used product is recycled to make another product.

By comparison, Europe’s mechanical recycling rate is between nine and 11%. This is because most of their recyclables are incinerated to produce energy and not to make new products.

“The products South Africa makes from recycled material goes back into thin film materials,” said Pretorius. These include shopping and rubbish bags.

Although sceptics believe recycling uses up more energy than other methods of waste management, Pretorius gives valid reasons why recycling should become a daily part of life.

She said petroleum, from which plastic is made, is a resource that we should stretch as far as we can. This would reduce the need to manufacture more plastic than is needed.

“The material has energy, so why waste it?” she said.

She also said that with South Africa running out of landfill space, it is sensible to rely on recycling.

The only time recycling can have a harmful impact on the environment, Pretorius said, is when consumers drive long distances to drop off waste and emit carbon monoxide through the use of cars.

Though recycling awareness is on the rise, Pretorius said there is still work that needs to be done to get people into the habit of recycling.

Recyclers are feeling the pinch as electricity costs are too high, making operations more expensive than before.

If the efforts of Sapro and South African Plastics Federation don’t pay off, Pretorius said that at least 34 500 families who rely on a collector’s income will suffer, 400 companies linked to the recycling industry will not be able to conduct business, prices for products such as refuse bags and irrigation piping will increase, and municipalities will eventually run out of landfill space.

To overcome these challenges, the survey indicated that the recycling industry must recover the highest percentage of used materials at the lowest cost.

This can only be achieved if the recycling industry takes the initiative when dealing with plastic industry forums to ensure that their expertise and equipment is used to everyone’s benefit; when recyclers partner with serious role-players to create awareness; and when recyclers approach government professionally so they are taken seriously.