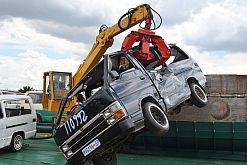 The first taxi to be scrapped, of the 350
that were taken off the roads, belonged
to Sipho Khanye, a PioTrans board member.

The running of Johannesburg’s Rea Vaya Bus Rapid Transit (BRT) system was officially handed over to the taxi industry on 7 February 2011.

Minister of Transport Sbu Ndebele passed the reins on to PioTrans, a bus company comprising former taxi operators, at a function in Nancefield in Soweto.

The system was previously run by bus company Clidet.

PioTrans has a 66.7% stake in Rea Vaya, with the City of Joburg and other stakeholders owning the remaining 33.3%. The taxi shareholders are from the Greater Johannesburg Taxi Council and Top Six Management.

Before the bus system could be implemented, there were a series of negotiations involving taxi associations who ran vehicles on the planned Rea Vaya route.

Some associations were strongly opposed to the implementation, while others supported it and were offered a stake in the new operation.

When the transit system was launched, there were several violent incidents fuelled by the conflict. The police arrested a number of individuals who were involved, and through further negotiations and compromises reached, the system has been running smoothly since then.

The minister said: “Today we celebrate a major milestone in the life of the taxi industry and of our country. We reaffirm that this important industry, which is owned, managed and controlled by black entrepreneurs, will no longer primarily be defined by violence and disorder.”

Several taxis were lined up, waiting to be scrapped as the minister spoke.

Former chairperson of Top Six Sicelo Mabaso, now the chairperson of PioTrans, said: “These taxis here about to be scrapped have a history … and my heart bleeds because today we say goodbye to them.

“We are hoping that even those taxi owners who are still against the BRT will now come on board as they will see this is working and it’s a viable business.”

Sipho Khanyi, taxi owner and board member of PioTrans, was sad to see his vehicle go: “I drove this only once when I went to fetch it after buying it. It has over the years been driven by my driver.

“Seeing it going under the presser is very painful, but I am happy that it is a move in the right direction as it guarantees my stake in Pio Trans.”

PioTrans and the City of Joburg have signed a 12-year operating contract with an annual worth of R184-million (US$25.4-million).

The 316 shareholders of PioTrans are organised into nine taxi operator investor companies and one trust.

Each shareholder in the new bus-operating company was required to contribute R54 000 ($7 500) from the proceeds of their scrapped or sold taxi, with some members contributing more than one vehicle.

PioTrans’ head of communications Eric Motshwane said: “We need to add true meaning to the rapid transit system by improving rapidness. We will achieve that once construction in some areas along the route has been completed.

“For now we need to hold public stakeholder meetings to determine what commuters want because it is about them. It is only then that we may know where to improve.”

Fast and reliable form of transit

Rea Vaya handles an average of about 30 000 passengers every day with 143 buses registered to PioTrans. The project has created about 1 100 permanent jobs.

All bus drivers have been recruited from the local taxi industry.

Rea Vaya was adopted by the city as a transportation solution in 2006 and started operating its first route in August 2009.

A new Rea Vaya route, which will run from Noordgesig, near Orlando in Soweto, to Parktown in the Johannesburg CBD will be running by 2012 and is expected to cost R1.2-billion ($165-million).

Another 150 buses will be added to the existing fleet of 143 to accommodate an additional 45 000 passengers per day.

The initial route, which runs from Thokoza Park in Soweto to Johannesburg, cost R1.6-billion (US$221-million) to roll out.