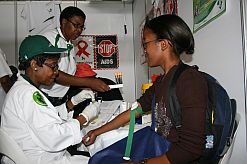 The French government has made a multimillion-rand donation to the Grabouw Community Health Centre in the Western Cape to upgrade its HIV/Aids clinic over the next two years.

The Western Cape health department said the R13-million (US$1.8-million) grant will be used to expand and improve the clinic’s facilities.

The centre, located in the agriculturally rich Overberg district, provides services for an estimated 50 000 residents annually, most of whom are farmers and farmworkers.

An increasing number of people have moved into the area over the years to seek work on farms and this has put pressure on the clinic’s capacity. As a result staff often have to take on extra duties they have not received training in, such as administering antiretroviral (ARV) and tuberculosis (TB) treatment.

The grant will help uplift ARV services at the clinic and enable a greater number of people to enrol for the treatment programme. Additional procedure rooms, four consulting rooms, four counselling rooms, a new waiting area, data-capturing room and more toilets will be built to accommodate extra patients.

The funds will also be used to improve the hospital’s pharmacy and drug-dispensing area.

Faiza Steyn, the department’s spokesperson, said French President Nicholas Sarkozy made a pledge to boost ARV infrastructure in the Western Cape after visiting it in September 2008.

“The two major constraints for the inclusion of more patients in the antiretroviral therapy programme are the shortage of human resources and the lack of health infrastructure,” she said.

Steyn added that the funds will also help achieve the National Strategic Plan goals, which include reducing new HIV infections by 50% and improving access to treatment services by 80%, by 2011.

“Health services dedicated to HIV/Aids and TB patients need to be increased, and implemented closer to the communities, especially in the most affected high-risk areas,” she said.

Provincial minister of health Theuns Botha welcomed the grant, saying the Western Cape government did not have the necessary financial resources to meet all the needs of public healthcare.

“We cannot do this alone. We are so grateful to the French government for their continued support to this province.”

Botha said the department is currently working on extending and renovating all community health centres in the province so they all offer services to treat and manage HIV/Aids, TB and other chronic conditions.

French ambassador to South Africa Jacques Lapouge said the Grabouw clinic was one of the many projects his government was funding in Africa through the French Development Agency.

The organisation falls under France’s Ministry of Economic Affairs, Finance and Industry, and is tasked with implementing social and economic upliftment projects in developing countries.

African states are the agency’s main focus, receiving about half of the funding. Other countries it assists are in the Mediterranean Basin, Middle East and Asia.