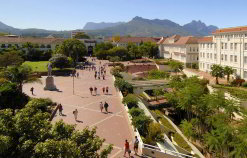 South Africa has yet again proved that the standard of its tertiary education is comparable with the best in the world. Two local universities, the University of Cape Town and Stellenbosch University, have achieved top honours by being listed in the Quacquarelli Symonds (QS) World University Rankings for 2011/12.

First published in 2004, the QS ranking is a respected global career and education network. Prospective students and staff from all over the world use the information to decide where to study and advance their academic careers.

Stellenbosch University (SU) received double honours as it was included in the QS listing’s top 500 universities, and also came in third highest on the African continent.

The University of Cape Town (UCT) was placed in 156th position, up from 161 last year. The QS system also continues to name UCT as the only university in Africa in the top 200.

Prof Russel Botman, SU’s rector and vice-chancellor, says that inclusion in the QS listing is a significant achievement for the university as it indicates that the international community has taken notice of the excellence of its teaching and research.

Stellenbosch University has done ground-breaking work as part of its HOPE project in the areas of nano-fibre water filter technology, food security, HIV/Aids, paediatric tuberculosis and various other research initiatives.

The HOPE project supports the UN’s Millennium Development Goals by focusing on world-class research aimed at improving the lives of South Africans and people elsewhere on the continent.

“Although we don’t chase rankings, we are proud to be recognised by our peers in this way. It is an important feather in our cap,” Botman says, adding that the rankings also expose local academics and students to more opportunities for research collaboration and exchange.

He says that SU has done a lot of work to improve its research output, and has received recognition as the university that delivers the most research output in the country per academic staff member.

However, he was surprised at the ranking received for international visibility. “The university has been working very hard to improve its international presence and visibility for the past four years, but we didn’t know that our work would be noticed so quickly,” he says.

Results of research conducted by Stellenbosch University in 2007 revealed that internationally the university wasn’t well known for the quality of its academic programmes. However, people were aware of the institution’s negative apartheid history.

“The ranking shows that our strategy to improve visibility of the university and bring about transformation is correct,” says Botman.

International recognition of this kind is beneficial for individual tertiary institutions and the country. UCT’s executive director of communications and marketing, Gerda Kruger, said in a statement that a good performance on the QS list sends the message that South Africans can get a world-class education without leaving the country.