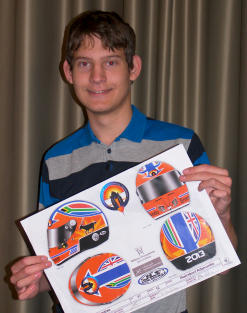 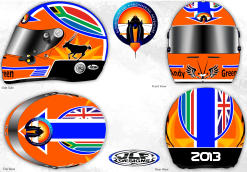 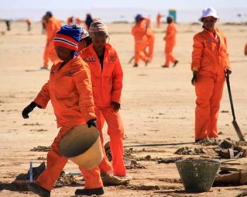 Some of the 300-strong workforce who spent over two years clearing the surface of Hakskeen Pan for the Bloodhound.
(Images: Bloodhound SSC)

Young Dirk Coetzee from the Northern Cape province has been named the co-winner of a competition that invited children to design a helmet for Andy Green, the daredevil who will be attempting to break his own land speed record in 2014/2015 in the Bloodhound SSC (supersonic car).

Driving Bloodhound, Green, a wing commander in the Royal Air Force, will attempt to reach 1 000mph, or 1 610kph. The event will take place on a specially prepared track at Hakskeen Pan, a dry lake bed in the Northern Cape, about 200km north of Upington.

“This is faster than any fighter jet can travel at ground level,” says Green.

He should know – he’s the first, and so far the only person to smash through the sound barrier on land, when he attained a speed of 1 228kph in Nevada’s Black Rock Desert, driving the Thrust SSC. The speed of sound on land is generally taken to be around 340 m/s or 1 236 km/h. This does vary with temperature, although not with altitude.

The helmet design competition was open to children of all ages from schools, colleges and universities in the UK, as well as schools from the Northern Cape. Designs were to be compatible with the blue and orange Bloodhound colours, had to identify Green as the driver, and had to feature an Arai logo – Arai is the helmet manufacturer.

“They had to think of how their designs would look from all angles and then portray these onto the template that asked for front, rear, top and both sides to be depicted,” said Dave Rowley, director of the Bloodhound educational programme in South Africa.

Entries closed in May and a UK and a South African winner were selected out of the hundreds of top-quality submissions. With the project gaining momentum and visibility around the world, the helmets and their talented young designers will be seen by millions of interested viewers as the big day draws nearer.

South Africa’s winner, 17-year-old Coetzee, is a matriculant from Adamantia High School in Kimberley. His design is bold and bright and features sunrise colours of yellow and orange, with a gemsbok – an antelope found in the arid regions of Southern Africa – on left and right, and the South African and British flags on each side of the crown.

“Superbly finished and proudly South African – it is perfect!” said Green, who was one of the judges.

The other winner is 11-year-old Sam Jones, from from Winterbourne Earls School in Salisbury.

“I was looking for bold, vibrant shapes, and two distinct national designs of some sort, one UK-themed and one South African,” said Green. “This was where the entrants could really show some flair.”

The two winning designs will now each be adapted for a real-life helmet that will be worn by the fastest man on earth – Green will wear the two helmets during his attempts to reach 1 000mph. The adaptation is being done by helmet paintwork specialists JLF Designs.

The youngsters will also receive an invitation to a Bloodhound test run, and the Bloodhound education team will visit their schools.

According to Northern Cape Tourism, 422 pupils between the ages of eight and 18, and from 25 schools throughout the province, exercised their brain cells to come up with designs that represented the Bloodhound brand, but incorporated local elements.

Roughly the same amount entered in the UK – nearly 1 000 entries were received in total. One of the aims of the competition was to foster enthusiasm in children around the project, which is being used to kick-start a new generation of engineers, mathematicians and scientists.

There were a number of category winners and runners-up, as well as the overall winners, in both countries.

Over the past few years the community of Mier in the Northern Cape has been busily preparing the track for Bloodhound. They have removed some 6 000 tons of pebbles, stones and rocks from the track, whose overall dimensions are 19 km long and 1.1 km wide.

Hakskeen wasn’t the team’s first choice – it was originally Verneuk Pan, also in the Northern Cape, and the site of Sir Malcolm Campbell’s unsuccessful 1929 record attempt. Verneuk is an Afrikaans word meaning “deceive”, and it is a reference to the heat mirages found there. However, Verneuk turned out to be unsound as the shale bed itself was disintegrating, and there were huge numbers of stones on the surface.

Hakskeen (Afrikaans, meaning “heel”, probably a reference to the shape of the pan on a map), on the other hand, was long enough, wide enough, had a good surface which would be easier to clear, had a new tarmac road for easy access, communications facilities, power on site, and ideal weather – it didn’t take long to make the decision.

This has created employment opportunities for the Mier community. A team of 300 was soon established and by mid-2012 they had cleared the main track and were working on a 300m-wide safety zone up the length of one side of the track.

The team has repeatedly expressed their admiration for the hard work of the Mier community. “This is a difficult update to write because I can’t really describe in words the scale of what is happening in South Africa,” wrote Green after a site visit in July 2012.

“Think about it for a moment – 19 000 m by 500 m. That’s 9 500 000 square metres of desert surface, cleared by hand. Imagine sweeping one lane of the road you live on from end to end – if you live on a long road, this rapidly becomes a huge task. And 9 500 000 square metres is the equivalent of sweeping that lane from London to Moscow – now that they have reached Moscow, they have to turn round and sweep the other lane back to London, to complete the safety zones. It’s simply staggering,” he marvelled.