Britain’s Prince Harry is on a tour of South Africa, following a visit to Lesotho. He has presented Archbishop Desmond Tutu with an honour in Cape Town, visited a youth centre, and played in a polo match. He will also go to the Kruger National Park, and spend a day each in Durban and Joburg. 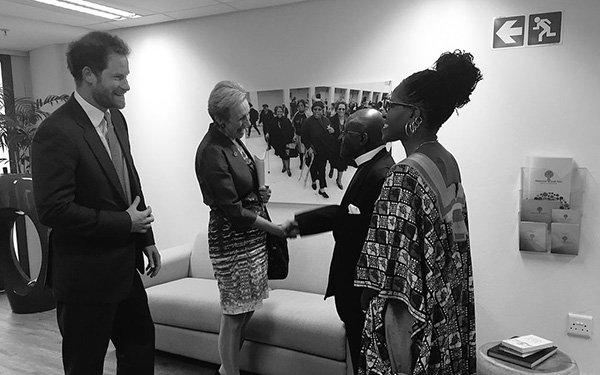 Playing soccer with youngsters, visiting a children’s centre, playing in a polo match and honouring the conscience of a nation, Archbishop Emeritus Desmond Mpilo Tutu – it’s all in a day’s work for Britain’s Prince Harry during his visit to Lesotho and South Africa.

The British royal presented Tutu with the insignia of an honorary member of the Order of the Companions of Honour on 30 November on behalf of Queen Elizabeth II, his grandmother. “The queen has made this appointment in recognition of his services to UK communities, and international peace and reconciliation,” said Kensington Palace.

The prince presented the honour when he met the Arch at the offices of The Desmond and Leah Tutu Legacy Foundation in Cape Town.

Tutu was moved and humbled by the gesture. “I have been very deeply touched,” he told Channel 24. “When you stand out in a crowd it’s only because you are carried on the shoulders of others. Without them I would be nothing. This is their award as much as it is mine.”

While at the foundation, the prince also learnt more about Tutu’s efforts in peace building, conflict resolution, development and human rights, as well as about the work of the foundation. In particular, he heard about its efforts to support disadvantaged young people to access the work place.

According to Kensington Palace, the Order of the Companions of Honour was instituted in 1917 by King George V. “It is conferred on people for recognised services of national importance, for a pre-eminent and sustained contribution in the arts, science, medicine or government.”

Later that day, Harry visited the Ottery Youth Centre, where troubled youngsters are rehabilitated. “The centre provides rehabilitative care and education to young boys between the ages of 12 and 18 years who more often than not come from broken homes,” Kensington Palace said.

Children at the centre gave him a wood carving of his mother, the late Princess Diana.

Prince Harry was given a wood carving created for him by the children at Ottery in their wood craft workshops pic.twitter.com/ZA2BSixETm

His last stop for the day was the Football for Hope Centre in Khayelitsha. It uses soccer to engage with young people on social issues such as gender equality and HIV/Aids awareness.

“The prince joined the coaches in practical football and life skills sessions on the pitch, including, on the eve of World Aids Day, a SKILLZ for HIV awareness activity,” the palace said. “It was a meaningful and memorable experience for Prince Harry, giving him the chance to meet young people in the heart of the township where they live.”

Video: Prince Harry larks around with some of the Football For Hope youngsters #RoyalVisitSA pic.twitter.com/qkRjOtXdnP

Prince Harry’s other engagements in South Africa have included playing in the Sentebale Polo Cup at Val de Vie in Paarl. In Lesotho he attended the official opening of the new Mamohato Children’s Centre at Thaba Bosiu; he also visited Prime Minster Dr Pakalitha Bethuel Mosili and King Letsie III.

He was in Durban on 1 December and will go to the Kruger National Park on 2 December and Johannesburg on 3 December.