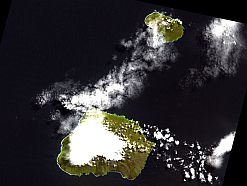 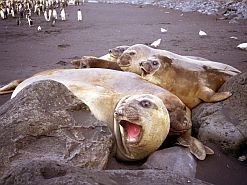 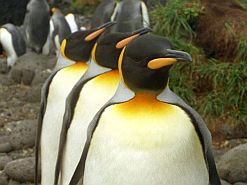 The islands are home to a sizeable
proportion of the earth’s King penguin
population. (Image: Sanap)

South Africa has proclaimed a vast new marine protected area, spanning 180 000 square kilometres, around the Prince Edward Islands in the Southern Ocean. This has paved the way for increased conservation and protection of vulnerable species such as albatrosses, penguins, seals, and orcas.

Minister of Environmental Affairs Marthinus van Schalkwyk gazetted the proposal in early May 2009. This followed a five-year planning process during which the national Department of Environmental Affairs and Tourism (Deat) worked closely with the local chapter of the World Wide Fund for Nature (WWF) to establish the framework for the valuable area.

The proclamation will come into force after the required 60-day gazetting period.

The new preserve, roughly the size of the state of Oklahoma, is to be known as the Prince Edward Islands Marine Protected Area, and will be South Africa’s 21st marine preserve. With only the marine preserves around the Northwestern Hawaiian Islands, Great Barrier Reef, and the Pacific Ocean’s Phoenix Islands exceeding it in size, it will be the fourth largest ocean preserve on earth.

South African financial services group Sanlam is one of the programme’s major sponsors.

WWF International director-general Jim Leape praised the South African government for its far-sighted decision. “South Africa has made a globally significant commitment to our oceans through its intention to declare this large marine protected area,” he said.

According to Deat’s marine and coastal management division, South Africa has already placed 18% of its 3 000km-long coastline under official protection. This means that activities such as fishing and diving are strictly regulated. These restrictions are in line with a decree issued at the 2003 World Parks Congress held in Durban, which stipulated that coastal countries must have at least 20% of their coastal area under protection by 2015.

One of the most significant aims of the new development will be a reduction in ecological damage caused by irresponsible fisheries, which are a serious threat to sea birds as well as fish. Fishing will be banned outright within a 22.2km protected area around the Prince Edward Islands, and other activities will be strictly controlled and monitored.

However, Deat will allow limited fishing in three of four additional restricted areas. This is solely for the purpose of scientific monitoring of populations of certain species of fish.

Politically, they are part of South Africa, which claimed Marion Island in 1947 and Prince Edward Island in 1948. The claims were carried out by crewmen from the frigate HMSAS Transvaal. The annexation became official later in 1948 when Gideon Brand van Zyl, governor-general of the Union of South Africa at the time, signed the Prince Edward Islands Act 43 of 1948 into law.

The islands fall under the jurisdiction of the Cape Town magistrate’s court and are part of ward 55, the electoral district that encompasses Cape Town’s port.

South Africa runs a meteorological and biological research station on Marion Island, which is overseen by the National Antarctic Programme.

The islands are a recognised biodiversity hotspot and breeding ground for a spectacular array of marine birds and mammals, such as leopard seals, skuas, and cormorants. Mysterious creatures such as the 14m long Colossal Squid, which has never been caught alive, have also been sighted in their waters.

The islands are home to four penguin species, which happily establish their rookeries on the tranquil, if rugged beaches. There are substantial populations of King and Macaroni penguins (450 000 and 750 000 respectively), as well as 5% of all the Southern Rockhopper penguins on earth, and 0.5% of Gentoo penguins.

The Southern Rockhopper species is endangered, while Macaroni penguins are vulnerable and Gentoos are near threatened. The King penguin is not currently under threat.

Other birds found on the islands include five species of albatross, namely the Wandering, Grey Headed, Indian Yellow-nosed, Dark-mantled and Light-mantled Sooty varieties. All are in varying degrees of danger. In addition, 14 species of petrels make their home here.

Three species of seal choose to breed on the Prince Edward Islands. These are the southern elephant seal and the sub-Antarctic and Antarctic fur seal. None of the three species are in any way endangered at the moment.

In the past, illegal and irresponsible fishing has posed a serious threat to the ecological stability of the Prince Edward Islands. One of the area’s most valuable assets is the presence of the Patagonian toothfish, highly favoured as a delicacy in the US, where it is known as “Chilean sea bass”, as well as in Chile, Argentina, Uruguay and Japan.

Marine sustainability watchdog Seafood Watch lists the fish as one of those that ecologically responsible consumers should avoid. According to WWF, illegal fishing vessels in the waters around the islands have taken a heavy toll on the Patagonian toothfish population.

A tragic consequence of the illegal toothfish industry is that large numbers of seabirds, especially albatross species, get hooked in the nets or on the longlines while catching their food, and drown. And according to the Antarctic and Southern Ocean Coalition, the pirate fishers use dynamite to remove sperm whales and orcas that come to feed.

The Antarctic and Southern Ocean Coalition also reports that, where protected marine areas have been proclaimed, the size of fish populations has increased both within their borders and in the surrounding waters. With the imminent establishment of the 22.2km protected zone, it is hoped that the same will apply to the vulnerable Patagonian toothfish and other species such as orcas, long-finned pilot whales, sperm whales, humpback whales and southern right whales.