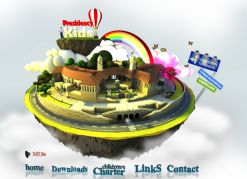 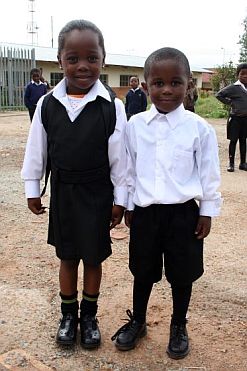 The website is aimed at children in
primary school. (Image: Emily Venter,
City of Johannesburg. For more free photos,
visit the image library.)

The Presidency of South Africa has launched a new educational website that aims to teach children about its work, inform them of their rights, encourage their interest in communication and the internet, and build national pride.

Minister in the Presidency Manto Tshabalala-Msimang launched the website on 23 March at the Union Buildings, attended by her guests – a special delegation of 24 children from schools in the Gauteng area.

Tshabalala-Msimang, formerly the controversial minister of health before the governmental shake-up in September 2008, took the children into her office to personally explain the work of the Presidency and listen to their input. A network of computers was set up so that the youngsters could familiarise themselves with the website.

“We are gathered here today to witness one of the key achievements in the children’s sector,”said Tshabalala-Msimang. “Our children need continuous information about their rights, and of course not forgetting that rights go with responsibilities.”

In the future, added the minister, the website will carry related information such as the United Nation Convention on the Rights of the Child, and the African Union Charter on the Rights and Welfare of the Child.

With a friendly animated yellow dog as a guide, the colourful and engaging website offers interesting information about South Africa, its government and leadership, its traditions, including the coat of arms, national flag and national symbols, and important historical structures such as Tuynhuys and the Union Buildings.

Tuynhuys, situated in the Parliament precinct in Cape Town, is the president’s residence and office when he stays in the Mother City. The old building dates back to the 17th century and the days of Jan van Riebeeck, the founder of Cape Town. Over the centuries the building has undergone extensive renovations and extensions, as well as a few name changes.

The impressive Union Buildings, the seat of the South African government, are situated in Pretoria. The structure, which is a national monument, houses the office of the South African president and is notable for its magnificent terraced gardens, which feature only indigenous plants.

Moving with the times

While they are having fun learning everything they need to know about South Africa’s government, children are unaware that they are also learning important technological skills that that will serve them well in the future.

“We want to move with the times,” said Tshabalala-Msimang, “and harness the minds of children at an early age. This will allow the next generation to get to grips with ICT and move forward with the world. It will also help them to know about their own country and build a sense of patriotism and pride in who they are.”

The target age group is six to 13 years, and the cheerful content is designed to connect directly with these little ones. The whole site, which has been in the planning for a year, is designed in Flash to give children an animated and wholly interactive 3D experience. Alphabet blocks, rainbows, balloons, and animals provide an enticing environment for youngsters to explore.

The educational content on the site is fully aligned with the school curriculum, added the minister, and was developed in consultation with the national Department of Education. All content was checked by a children’s language editor to ensure that the target audience will be easily able to understand.

There is a downloads area for important information such as section 28 of the constitution – which deals with children’s rights – and government initiatives such as the national orders, the country’s highest honours, and the Batho Pele (SeSotho, meaning “people first”) scheme that aims to improve the quality of government services. These may be saved and read at leisure.

Useful links are provided, as well as a facility for feedback. “We encourage the public, parents, teachers, and other interested parties to help us to constantly improve the site,” sad Tshabalala-Msimang.