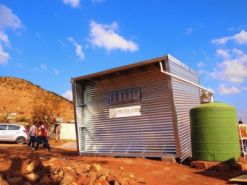 The pod’s many green features include a 1000 litre tank that fills up from harvested rain water.

A youngster relaxes on one of the bunk beds inside. Anton Bauer, an AFAC director, said if this was made for a family it would feature maybe single beds instead of bunk beds.
(Images: Architecture for a Change)

A Johannesburg architecture firm would like to dispel the connotations surrounding corrugated iron, and instead would like people to seen it as more than just a material used to build cold, damp shacks in informal settlements.

Architecture for a Change (AFAC), in collaboration with Youth Zones, has built a club house for a soccer club in Mamelodi in Tshwane using corrugated iron, as well as incorporating green technologies. Youth Zones, a spin off from the 2010 World Cup, works in informal settlements to improve the sporting capabilities of young people.

Members of the club can now rest in their clubhouse, which has been designed to fit two bunk beds. The structure, the Pod, is insulated, and the roof is angled for rain run-off. It is assembled off site and then flat-packed and shipped to wherever it will be erected. Apart from a concrete base, the structure, which can function as a clubhouse or home, can be assembled by three people in less than a day.

Green features such as insulated walls, solar electricity and rain water harvesting are used. The Pod is a prototype for a low-cost, off-the-grid housing solution for informal settlements. This makes it an effective solution even in areas that do not have sufficient infrastructure.

Anton Bauer, an AFAC director, said: “This is not a final solution on the housing debacle in South Africa. It just goes to show how corrugated iron can be used in an effective way that will make households comfortable.”

Politics was always involved when it came to corrugated iron being used to build houses, he explained. “People believe only brick housing is the best, especially because of the negative connotations attached to [corrugated iron] because of it being used mainly in informal settlements.”

The unit’s 220mm-thick masonry walls gave it excellent thermal performance. It used solar energy for lighting, and it harvested rainwater in a 1 000-litre tank – a luxury in informal settlements. The unit was also suspended above the ground to prevent flooding. The Pod’s materials and aesthetic were chosen to suit its informal context. The wall panels were prefabricated to speed up construction, and the home featured a solar cooker.

Fellow AFAC director Dirk Coetser added: “We aspired to design and build a small building that blends into its informal context but that has a hint of contemporary design and has optimal environmental performance.”

The Pod prototype costs about R45 565 (US$4 500) to complete, putting the structure out of the reach of many people who live in informal settlements, but as the AFAC refines the design, it hopes that mass production will lead to more affordable prices. “The thing is it costs more because we only build one at a time. If we had to build them in large amounts the price would drop from there to about R15 000 ($1 480) a unit,” said Bauer.

The group would have to build more and show people these could be lived in, and maybe that would change the perception of corrugated iron in South Africa, which was seen as a product only used in informal settlements.

According to the UN Habitat State of the World’s Cities 2012/2013 report, 62% of the urban population in sub-Saharan Africa lives in slums. Urban populations in South Africa have almost trebled in the past 50 years, and according to the Census 2011 results, the population of Johannesburg, the monetary hub of Gauteng, increased by 1.2 million people between 2001 and 2011.

Living conditions in these settlements are typically poor, and a range of basic livelihood issues challenge residents, including poor access to sanitation and water supply, solid waste accumulation, recurrent shack fires, safety and security risks, and a range of health hazards.