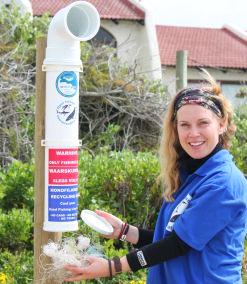 The bins have an opening at the top,
where the pipe curves, and the bottom
is sealed to prevent fishing line from
blowing away.
(Image: Aim Marketing and
Communications)

Innovative plastic pipe bins are being used in a waste removal project – the first of its kind in South Africa – to clear discarded fishing line from beaches along the country’s coastline.

The specially designed bins form part of the Dyer Island Conservation Trust pilot project, an initiative that aims to reduce the number of sea animals and birds that get tangled in marine debris. The project operates along the Gansbaai shoreline in the Western Cape.

Dyer Island, a 20-hectare nature reserve, is home to large numbers of sea and shore birds. It is also an important breeding site for vulnerable birds such as African penguins, endangered bank cormorant and roseate tern.

The South African Plastic Pipe Manufacturers Association (Sappma), a group of companies in the plastic piping business, together with one of its members, DPI Plastics, has provided a major boost for the project by donating plastic pipes to build more bins where fishermen can throw away their old lines.

“By donating these pipes, we are doing something practical to reduce the amount of fishing line entering and remaining in the marine environment,” says Sappma CEO Jan Venter.

The first network of 21 bins has already been placed at local beaches and popular fishing spots such as Franskraal, Gansbaai, Kleinbaai, Romansbaai, Pearly beach and Kleinmond.

The donation has made it possible to expand the project and install another 100 bins at other areas along the coastline, including Betty’s Bay, Hermanus and fishing areas at blue-flag beaches managed by the Wildlife and Environmental Association of Southern Africa.

The plastic pipe bins are unlike standard round bins found at beaches – they look just like the submarine periscopes used by skippers to scout for threats on the surface of the water.

They are made from PVC elbow pipes that are mounted on long wooden poles.

The bins have an opening at the top, where the pipe curves, and the bottom is sealed to prevent fishing line from blowing away.

“These pipes are perfect for the job at hand as they offer outstanding resistance to corrosion and the elements”, Venter says.

The bins have been placed at beaches and fishing spots in the area and anglers are encouraged to use them to recycle or dispose of their used fishing line. Municipality officials are responsible for opening and removing the waste on a weekly basis.

John Kieser, environmental manager for coastal provinces and international coastal cleanup coordinator of Plastics SA, got the idea to use plastic pipes after a visit to the US two years ago.

He was attending the international coastal cleanup conference where he saw a similar successful project started by the Boat US Foundation, a nonprofit organisation dedicated to promoting safe and environmentally sensitive boating.

He then approached Sappma to see if they wanted to get involved.

According to Venter, discarded fishing line is listed eighth out of the top ten pollutants on beaches – and is the most hazardous to animals such as penguins and seals.

It is sometimes accidentally ingested by birds and animals, resulting in injury or death, and it is dangerous to boaters and swimmers. Fishing line is also used by birds for nesting material, causing chicks to become trapped in nests.

“Most of the smaller marine animals found each year are entangled in this material,” Venter says.

“Discarded fishing material such as nets, monofilament line, crayfish traps and anchor ropes are responsible for far more damage to large marine life than any other marine debris found at sea.”

Monofilament fishing line is also a major coastal polluter, as it takes more than 500 years to decompose.

Kieser says that fishermen have responded positively to the project and although the initiative is targeting coastal areas, some bins have now reached inland waterways and dams. 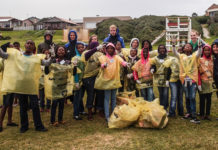