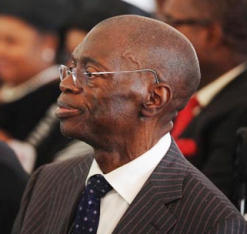 Former chief justice of the Constitutional Court, Pius Langa, was widely admired and respected. He made a significant contribution to the establishment of democratic processes in South Africa.
(Image: GCIS)

Pius Langa, the former chief justice of South Africa’s Constitutional Court, who died in Johannesburg on 24 July 2013, began his career in court as an interpreter and messenger in the Department of Justice.

Before that he worked in a shirt factory and, as his friend and current deputy chief justice Dikgang Moseneke told Radio 702 on the day his death was announced, it took 35 years of hard slog for Langa to reach the position of highest judge in the land’s highest court. A patient man from a humble background, he plotted each step on the rung and then moved on to the next one.

Pius Nkonzo Langa was born in Bushbuckridge, then the Eastern Transvaal and now Mpumalanga, on 25 March 1939. The second of seven children of deeply devout parents, he completed his high school education through private study. He did unskilled work to pay for his long-distance studies through the University of South Africa, in 1973 obtaining his B Juris and in 1976 his LLB.

In 1966 he married Thandikile, who died in August 2009 at the age of 64. The couple had six children and many grandchildren.

As a township resident during the early years of his working life, Langa was involved in several community projects such as establishing civic organisations and residents’ associations and providing guidance for the youth.

He served in various capacities in the justice department – he was a prosecutor and a magistrate, and in June 1977, was admitted as an advocate of the Supreme Court of South Africa. He later practised at the Natal Bar and attained the rank of senior counsel in January 1994.

During the 1980s and early 1990s, Langa served in the structures of the United Democratic Front, was a founder member of the Release Mandela Committee, was and a member of the reception committees which worked to secure the release of other political prisoners.

Langa’s practice as an advocate reflected the struggle against the apartheid system and his clients included the underprivileged, various civic bodies, trade unions and people charged with political offences and under apartheid security legislation.

He later became involved in the work of the Convention for a Democratic South Africa and of its successor, the Multi-Party Negotiating Forum; served on the executive committee of the Democratic Lawyers Association; and was founder member of the National Association of Democratic Lawyers, serving as its president from 1988 to 1994.

He served on the boards and as a trustee of various law-related institutions, and was involved in the founding of the South African Legal Defence Fund. He also served as commissioner of the pre-Constitutional Human Rights Commission, later known as the Human Rights Committee.

The highest court in the land

He was appointed as the country’s chief justice and head of the Constitutional Court with effect from June 2005 until his retirement in October 2009.

Langa held several academic posts – in June 1998 he was appointed honorary professor in the Department of Procedural and Clinical Law at the University of Natal. He served for several years as distinguished visiting professor at the Southern Methodist University, Dallas, US, and was chancellor of the University of Natal from 1998 to 2004 and of the Nelson Mandela Metropolitan University.

In 2008, former president Thabo Mbeki awarded him the Order of the Supreme Counsellor of the Baobab.

After his retirement, Langa went on to chair the Press Freedom Commission, launched in 2011 as an independent body tasked with investigating a suitable print media regulatory system for South Africa.

On hearing of his death, Joe Thloloe, director of the South African Press Council, said he was very sad. He said he first met the former chief justice when he was the chairman of the Press Freedom Commission, and Langa had helped the print industry make important changes and regulations.

“He was the kind of person who could get to the core of an issue. News is what it is today because of him. He really did have a huge influence in our industry and we are grateful,” he said.

Thloloe said that he also knew Langa as a lawyer who defended freedom fighters.

“On behalf of the Department of Justice and Constitutional Development, I would to express our heartfelt condolences to the family of the late former chief justice Pius Nkonzo Langa,” said justice minister Jeff Radebe in a statement. “We are saddened by the untimely passing of the former chief justice, whose contribution to the democratisation of the country is admirable. In Justice Langa, the country has lost a legal stalwart who dedicated his life to the pursuit of human rights and rule of law.”

Langa’s most recent public appearance was in February at a ceremonial Constitutional Court session in honour of Chaskalson. He was admitted to a Durban hospital in April and appeared to be recovering. However, he was recently admitted to the Milpark Hospital in Johannesburg and died there.

His brother Mandla said he had been in hospital for about a month after a long illness. He described his brother as a good man and “an extraordinary human being”.

The Presidency said President Jacob Zuma was saddened to learn of Langa’s death. “The country has lost one of its best legal minds, a dedicated human rights jurist and a veteran struggle activist,” Zuma said.