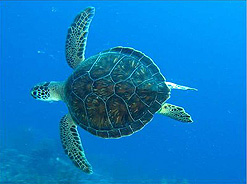 A hawksbill turtle, one of the many
sea-dwelling species threatened by
irresponsible fishing.
(Image: The Conservation Report)

The work of South African biologist Dr Samantha Petersen has won the second UNEP/CMS Thesis Award on Migratory Species Conservation. The award is presented by the Convention for the Conservation of Migratory Species of Wild Animals (CMS) under the auspices of the United Nations Environment Programme (UNEP) and is sponsored by National Geographic Deutschland and Lufthansa.

The jury consisted of 11 leading scientists and conservationists. After narrowing the entries down to a shortlist of 10 theses, the judges agreed that Petersen’s entry, which focused on her research into the impact of commercial fishing on migratory seabirds, sea turtles and sharks, was by far the best out of those submitted by 32 candidates from 18 countries. She will travel to Rome in December 2008 to receive the award, which will be bestowed during the ninth CMS conference.

Petersen is joined on the honours list by another South African, the distinguished ornithologist Dr Ross Wanless, who took third place with his work titled Impacts of the introduced house mouse on the seabirds of Gough Island. The thesis studied the predation by house mice (Mus musculus) on chicks of the Atlantic Petrel (Pterodroma incerta) and Tristan Albatross (Diomedea dabbenena). The mouse attacks have affected the breeding success rate of the Atlantic Petrel to such an extent that the population may be unable to sustain itself.

Wanless was recently appointed as BirdLife’s Global Seabird Programme Coordinator for Southern Africa. BirdLife is a worldwide organisation dedicated to the enjoyment, conservation and understanding and study of wild birds and their habitat.

Petersen currently works for the local chapter of the World Wide Fund for Nature (WWF) where she is the Responsible Fisheries Programme Manager. This follows a four-year stint at BirdLife South Africa where she headed up the Southern African Save the Albatross Campaign.

The latest UNEP/CMS Laureate holds a diploma in veterinary nursing from Onderstepoort Veterinary College, a BSc (zoology and environmental science) from Unisa and an honours degree and PhD, which she completed in February 2008, from Cape Town University.

She financed her studies by working in the field on the Prince Edward islands, studying the impact of long-line – fishing lines up to 20km long with baited hooks at intervals – and trawl fishing on albatross and petrel species. Her project formed part of South Africa’s obligation as a signatory to the Convention for the Conservation of Antarctic Marine Living Resources.

Petersen’s latest project, the Responsible Fisheries Programme, uses an ecosystem approach to help reduce the high death rate of certain sea creatures as a result of negligent and wasteful fishing practices. She described the number of seabirds, turtles and sharks killed every year by the fishing industry as “substantial and staggering”. Full implementation of the programme in South Africa and Namibia is expected by 2010.

The ecosystem approach is defined by the Convention on Biological Diversity as ‘a strategy for the integrated management of land, water and living resources that promotes conservation and sustainable use in an equitable way’. Essentially it acknowledges that all elements of an ecosystem are linked and takes into consideration the effects of actions on all elements. The ecosystem approach is considered one of the most important principles of sustainable environmental management.

The Responsible Fisheries Programme works with all stakeholders to protect and enhance the health of the marine ecosystem, compared with the traditional method which only monitored the health of commercial fish stocks. It focuses on finding win-win solutions to ensure efficient fishing, and raising public awareness on the impact of fishing on marine ecosystems.

“Our work in this sphere is absolutely crucial now,” said Petersen. “In the last decade concern globally has grown over the impact of bycatch on these species, especially in long-line and trawl fishing, which decimated their populations. It’s estimated that 75% of global fish stocks are either exploited to their maximum or over-exploited and that around 25% of marine resources landed are dumped. This has led to a catastrophic decline in vulnerable marine life, including the loss of up to 90% of the large predatory fish.”

The Convention for the Conservation of Migratory Species, also known as the Bonn Convention, is an intergovernmental treaty established to conserve terrestrial, marine and avian migratory species wherever they occur in the world.

Since the CMS came into force 29 years ago it has garnered members from Africa, Central and South America, Asia, Europe and Oceania, which number 110 as of 1 October 2008. All but 10 African countries are bound to the CMS in some way, whether as a party to an agreement or a signatory to one of various memoranda of understanding, which are less formal than the legally-binding agreements. Most African countries are full parties to the convention.

The UNEP/CMS Thesis Award on Migratory Species Conservation was launched by the Bonn Convention secretariat in 2004 to celebrate the organisation’s 25th anniversary. It is worth €10 000 ($13 000) and is presented every two years with a view to promoting research and conservation around migratory animals. Data from theses submitted is also entered in the Global Register on Migratory Species.

The winner’s thesis must shed new light on the biology of migratory species or give details about external factors that may disrupt their migration patterns. Research results must also be applicable to conservation measures for migratory species.

Commenting on Petersen’s thesis, the judges said that her work has made a significant contribution to improving affected species’ conservation status as it shows the devastating effect of the catching of non-targeted creatures by commercial fisheries. Seabirds, turtles and sharks get killed in large numbers during fishing operations, with the result that numerous species are now threatened. The winning thesis clarifies the circumstances under which death occurs, and therefore provides a platform for recommendations that will reduce the impact of fishing operations on threatened creatures.

WWF South Africa CEO Dr Morne du Plessis said, “This is an important award as it demonstrates not only the scientific expertise in WWF and in South Africa’s scientific community, but also highlights the growing concern over the impact of human activity on marine resources.”