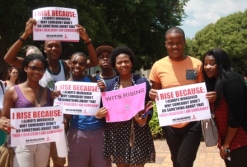 One Billion Rising takes its name from the fact that one in three women on the planet will be raped or beaten in her lifetime – making up a billion women worldwide. 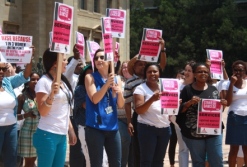 Men and women demonstrated their outrage by participating in the Wits Rising, dancing and chanting the three commands, “Strike, Dance, Sing”, which is the campaign’s theme.
(Images: Cadine Pillay)

Thousands of South Africans gathered at Wits University on Thursday afternoon to protest the violent rape and murder of 17-year-old Anene Booysen, and also call President Jacob Zuma to action ahead of his annual State of the Nation address.

The so-called Wits Rising was organised by One Billion Rising, which is a global campaign to end violence against women and girls. There was a sadness in the fact that it occurred on Valentine’s Day, the global celebration of love and romance, but ultimately heartening because men and women alike were there to demand an end to sexual violence.

In the hours before the speech, Twitter was abuzz with calls from citizens, on the hashtag #stoprape, for Zuma to step in and take firm action.

Following the Wits Rising, the president used his annual address to call for unity in action to end the epidemic of rape in South Africa.

“The brutality and cruelty meted out to defenceless women is unacceptable and has no place in our country,” Zuma said, adding that he had instructed law enforcement agencies to treat such cases with urgency and importance.

One Billion Rising takes its name from the fact that one in three women on the planet will be raped or beaten in her lifetime – making up a billion women worldwide.

In South Africa it is reported that a woman is raped every 17 seconds and that 30% of girls below the age of 15 are at risk of being sexually violated. The Medical Research Council estimates that up to 3 600 rapes happen daily in the country. A culture of abuse means that for many, rape is not seen as a crime but a daily occurrence.

Spurred on by these shocking statistics, men and women demonstrated their outrage by participating in the Wits Rising, dancing and chanting the three commands, “Strike, Dance, Sing”, which is the campaign’s theme.

Art activist groups Drama For Life and ThembaLab delivered their creative interpretation of the campaign in the form of poetry and a flash mob of dancers, while moving speeches were delivered by Wits faculty members and activists.

“Enough is enough,” said popular actress and activist Hlubi Mboya at the rising. “The violence against women has to stop.” Mboya, who has been an Aids activist for many years, interacted with the crowd, urging this generation of young people to “be the change”.

“The abuse and violence suffered by women in South Africa is persistent, continuous, habitual and normalised,” said Alice Jay from the web activism group Avaaz. “Anene Booysen’s death has highlighted the failure of attempts in our country to counter the scourge that oppresses women in South Africa.”

One Billion Rising campaign speaker Pumla Gqola said the horrific death of Booysen, who was raped, tortured and mutilated, has indicated that South Africa has failed yet another generation of young women.

“It is important that education institutions, government, civil society, the private sector and every person who resides in South Africa take an oath to act against the violence that has come to characterise who we are as a nation,” Gqola said.

In a statement of commitment on behalf of Wits, vice-chancellor Prof Loyiso Nongxa said South Africans owe their children a life free from violence and fear, as these are the most vulnerable citizens of society.

“To ensure this, we must become tireless in our efforts not only to attain peace, justice and prosperity for countries but for communities and members of the same community,” Nongxa said.

One Billion Rising later moved to Johannesburg’s notorious Old Fort Prison Complex, which housed the women’s jail in the apartheid years  and was a place where thousands of ordinary people were brutally punished.

Nowadays the site serves as a place of protest and a platform to tell the stories of all South Africans – this is where the Wits protestors continued their activities, expressing their feelings with drumming, and more poetry readings, dancing and singing.

The well-known singer Aura Msimang performed her protest piece, Song for the Voiceless, written after she witnessed the atrocities of the Rwandan war and its impact on women and children.

Her music was accompanied by a choir of children from Sheikh Anta Diop Primary School and women of the JugaMama Collective of Rosettenville, who are from the DRC.