Philani Dladla is a well-known feature of Joburg’s streets. The Pavement Bookworm reads books and gives reviews to passers-by. If they like the review, they buy the book. This way, he pays rent and buys food. But his bigger goal is promoting literacy among children. 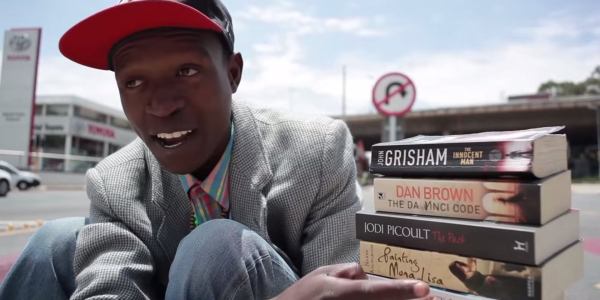 Philani Dladla, also known as the Pavement Bookworm, has used his love for books to lift himself out of homelessness. He now sells enough books to rent a flat in the city centre of Johannesburg. (Image: Tebogo Malope, Youtube)

Walk along Gleneagles Road in Greenside and you will find Johannesburg’s trendiest people having sundowners at one of the bars or restaurants that line the street. Look closely and you will find, among the bustle, a lone figure clutching a handful of books.

Philani Dladla is a roadside bookseller who meets all his customers outside Doppio Zero restaurant. Known to locals as the Pavement Bookworm, he has become a common feature of Johannesburg’s cityscape. “I have made friends with my customers and know what kind of books they read,” he says. “These days people are very generous; they support with book donations so I don’t [have to] buy books from a place in Doornfontein.”

Until early 2014, Dladla operated on Empire Road, where many motorists and passers-by got to hear of the stories he was reading. “I would tell them, ‘Hey, this is a very good John Grisham book. It’s about a [man] who double-crossed his business partners.’ They would say, ‘How do you know so much about books? Why don’t you sell them?’ And I would say, ‘No, I value these books. I’m just here to tell you what is in these books.'”

But eventually he saw the return he would get if he sold his books, and today he has formed strong bonds with his customers and earns enough to pay for food, clothes and rent for a flat in Joubert Park, in Johannesburg’s city centre. He is also involved in a community reading project. He started a club at Lepeng Pre-Primary School in the Johannesburg CBD, reading to 55 children.

WATCH: Part one of an interview with the Pavement Bookworm by Tebogo Malope

On a typical day, he receives calls from any number of customers wanting to buy books from him. He arranges a time, preferably early in the morning, to meet in Greenside. With only the requested books in tow, he takes a taxi from the city centre to Gleneagles Road and waits for his customers. “I know my people. I get in here and wait for them. After half-past-nine if they don’t come I just go back home, prepare my stories for the day that I’m going to be reading for my kids and go in the afternoon and read for them.”

Currently involved in the production of a children’s magazine that looks to encourage children across South Africa to read, Dladla has found a confidant in Leizl Eykelhof, a freelance journalist who is working on the magazine with him. They first met when Eykelhof was working on the Nali’bali literacy campaign. “He is a great ambassador for children’s reading and literacy,” she says. “I feel there are a lot of children in South Africa [who] don’t read books. And it’s been shown that when a child grows up with books, they have a much better chance at getting further in life.”

Dladla’s love of books began on his 12th birthday. Joseph Castlyne, his mother’s boss at the clinic where she worked, gave Dladla a copy of The Last White Parliament by Frederik van Zyl Slabbert. It is a personal account of Slabbert’s time as opposition leader in parliament during South Africa’s apartheid years.

Castlyne made a deal with Dladla on that day. “He promised me that if I could read that book and tell him about it he would buy me another one. That’s what kept me reading.”

It was the moment that started his love affair with books. When Castlyne died in 1998, he left 500 books for Dladla.

In recent months, local and international media have been latching on to Dladla’s inspiring story. However, there are more elements to his tale. His life has been tumultuous and it has taken him from an abusive home in idyllic Port Shepstone to the dark streets of Johannesburg.

When Dladla speaks, he has the habit of looking down at his lap. Perhaps it is to hide the scar on his forehead. Towards the end of 2014, he became the victim of numerous beatings by homeless people he once thought were his friends – prompting him to move business from Empire Street to Greenside. “They would say, ‘You think you are better than us.’ I fear the next beating I get will be my last,” he says, echoing what the thugs told him.

Though Johannesburg’s streets have been unkind to him, Dladla is no stranger to hostility. If anything, it has made him stronger. He grew up in the rural Oshabeni village in Port Shepstone, KwaZulu-Natal. His father regularly beat him and his two younger brothers.

As an adolescent, Dladla took the frustrations from home to school, where he became a bully. He beat up other schoolchildren and took their lunch. He even began drinking and smoking just so he could be “one of the cool guys”. “It was nice to be a bully because girls liked us. I wanted to be the baddest [sic] guy.”

He was expelled from school and in 2005 was sent to a further education and training college to take up a vocational course. But this only exacerbated his unruly behaviour. “I wanted to impress these others guys at college. I started smoking weed, drinking and bunking class.”

Things turned awry when, in one violent incident, he was stabbed in the chest. “That’s when I lost my mom’s hard-earned savings,” he says. The hospital bills piled up: “The wound turned septic. It took more than two months to heal.”

He never went back to complete his schooling. “When I was discharged from hospital, people from my community started laughing at me. They would say, ‘Hey you see what happened to that guy next door? That boy is naughty. I don’t want him anywhere near my child.'”

Having lost the opportunity to be educated and ostracised by his community in Oshabeni, Dladla thought the only way out was death. “I tried hanging myself,” he says.

But after kicking the chair from underneath his feet, he realised he could not bear the pain. He began struggling. “I couldn’t scream,” he recalls. His brother found him and put the chair under his feet and cut the rope.

He tried killing himself several times after that: by overdosing on pills and even jumping in front of a moving car. Tired of these antics, his mother decided to send him to Johannesburg to find a job and survive on his own. It was to lead to his redemption.

The city of gold

Dladla’s move to Johannesburg in 2008 did not bring immediate change to the young man; rather, his transformation was slow and painful. At first he was a waiter at Gramadoelas, a popular restaurant until its closure in 2013.

A year later, he got a job as a care worker at the Johannesburg Association for the Aged. He bought drugs with his earnings, experimenting with everything from crack and cocaine to crystal meth. He started skipping work because he was too high. He found he was not getting paid enough to fund his habit. Eventually, in 2011, he was on the streets after failing to pay the rent.

Going back to his mother’s home was not an option; he would rather perish on the street, he admits. “There were so many guys dying on the street so my hope was that I would smoke until I died.”

He started sleeping under Nelson Mandela Bridge in Braamfontein, a spot where many homeless people find small comfort. Despite his dire circumstances, Dladla never resorted to begging. “I have never been a beggar. I still wanted to make money and give people value for their money.”

A turning point came in 2012, when he saw how homeless people were treated like “rubbish bins”, given old clothes and stale food. He decided to take control of his life and tackled his drug addiction first. At the same time, he started selling books on the side of the road. “I thought of telling people of how good those stories are. People wanted to keep those books. And they could tell I was without a home because they could smell I was stinking.”

Using the money he made, he would buy instant soup packs and bread to give to the homeless people he lived with under the bridge.

The death threats came after Dladla cleaned up his life. “Up until today, I get robbed and beaten at least twice a month. They going to wait for me to be happy again then beat me up again. Like when they take my phone, they won’t beat me until I get a phone again.”

While doing one interview for a TV magazine show, homeless men with whom he had stayed under the bridge and for whom he had bought soup and bread threatened to kill him. He and the crew had to flee for their lives when the men started throwing stones at them.

To avoid being beaten or killed, Dladla has decided to move back to his home in KwaZulu-Natal until “things quieten down”.

He is sad to leave behind the children at the pre-school after he has created such a strong bond with them. He is even looking into starting a non-profit organisation that will take care of the children and provide them with bursaries. “Even if these thugs can rob and kill me before I go home, at least these kids will have something to remember me,” Dladla says.

You can donate books to Philani Dladla through pavementbookworm.co.za.