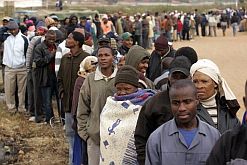 The Independent Electoral Commission (IEC) has welcomed the emergence of the new organisations as an indication of flourishing democratic participation. “Multiparty democracy is thriving in our country,” said Dr Brigalia Bam, the commission’s chairperson.

South Africans will go to the polls on 18 May 2011 to elect their new local government officials.

A total of 121 political parties will contest the elections across the country. This is an increase from the 97 parties in 2006 and the 79 in 2000.

Participation of independent candidates, those without political-party backing, is also on the rise. The total number of independents stands at 748 this year, up from 667 in the previous local elections.

“The increase in parties and candidates participating in the upcoming election is an indication of a broadening in electoral participation at local level,” said Bam, “and is very encouraging as far as the entrenchment of democratic processes is concerned”.

Some ANC members have decided to go independent after being dissatisfied about candidates’ selection.

Most of the new organisations join scores of others that only contest in their respective provinces. They operate as organisations hoping to have future influence over how their communities are governed.

New kids on the block

The National Freedom Party (NFP) is the only recently formed organisation contesting outside its founding province. The NFP was launched by Zanele kaMagwaza-Msibi, who led a splinter group from the Inkatha Freedom Party just three months ago. It has 2 591 candidates in eight provinces. More than 50% of its members are in KwaZulu-Natal, where it was founded.

The Congress of the People, an ANC break-away party founded in 2008, is also comparatively new in the IEC’s books as far as local government elections go. Although somewhat troubled, the party enjoys the third largest representation with 5 929 candidates in all nine provinces. It will contest in 214 municipalities.

Though it’s had a chance to establish itself since its founding in 2007, the African People’s Convention will participate in nationwide local elections for the first time this year. The party, a splinter from the Pan Africanist Congress of Azania, will contest in all provinces with 2 158 candidates.

The Mpumalanga Party is a new local organisation campaigning via a ticket of relocating the community of Moutse back to the borders of Mpumalanga province. The community has been up in arms over the government’s decision to demarcate it to Limpopo province, where the party’s 74 candidate are registered.

Ikusasa Lesizwe Independent Movement is another new organisation in Mpumalanga. The party has 44 candidates in the province.

Makana Independent New Deal is new on the political scene in the Eastern Cape. It has a total of 27 candidates in the province. Other fresh organisations include the Socialist Civic Movement and the Bushbuckridge Residents Association in Mpumalanga.

“I am happy that a slight increase in the percentage of women candidates has been recorded,” Bam said.

Women remain the majority on the IEC voters’ roll, which has more than 24.5-million South Africans registered on it.

“I am very proud of women,” Bam said. “Despite keeping the home fires burning, women are consistently retained their overall majority in terms of the voter participation gender split in the voters’ roll.”

With just more than a month to go to election day, campaigns are gaining momentum. All major parties have launched their manifestos and have embarked on all-out electioneering.

“The IEC is proud of all who will be garnering votes to consolidate our gains and deepen our democracy,” Bam said.