Catch Oyama Matomela and other inspiring South Africans playing their part to build a strong South Africa in the Play Your Part TV series on Sundays at 9pm on SABC2. 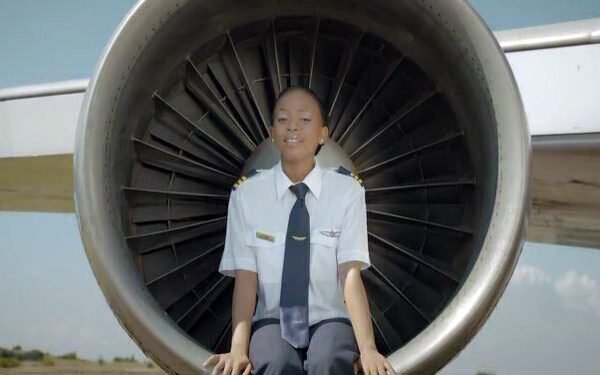 Matomela was born in 1991 in Port Elizabeth and it was there, in the friendly city, that her aunt would take her and her cousins to the Port Elizabeth International Airport to watch aircraft take off and land.

At just 23 years old Oyama Matomela is flying high as a female pilot in South Africa.

Matomela was born in 1991 in Port Elizabeth and it was there, in the friendly city, that her aunt would take her and her cousins to the Port Elizabeth International Airport to watch aircraft take off and land.

“These Sunday afternoon visits unveiled an incomparable passion and love for flying at a young age. Research and extensive hard work in my high school years led to me being awarded a bursary by the Department of Roads and Transport of the Eastern Cape to begin my flying training at the renowned 43 Air School [in Port Alfred],” she says.

“I chose this career because it’s unlike any other. I’ve had these aspirations from a young age…” she says.

The Collegiate Girls School alumnus is the fourth student to have been awarded the provincial department bursary, and the first woman.

“The year and eight months I spent training was probably one of the most difficult yet rewarding things I have ever done,” she says. She adds: “The training was challenging and 110% effort was required – which is what I was willing to give to reach my goals at this age.”

After passing her Private Pilot Licence (PPL), she later obtained an instrument-rated commercial pilot licence in August 2011. An instrument rating grants her licence to fly across international airspaces.

Matomela passed the PPL in just 20 months; the average time to complete the course is between one and five years, depending on how frequently, and what aircraft, students fly, and in what weather.

Matomela then moved to Johannesburg in June 2013 to begin work as a flight instructor at Superior Pilot Services at Grand Central Airport in Midrand, where cadet pilots from South African Express airline are trained.

A few months later she was invited for an interview with South African Express for a junior first officer position. The interview was successful and she joined the team in January 2013. She is currently training to fly the Bombardier Dash Q400 aircraft.

Matomela hopes to earn a command on the jet fleet and become a training captain, and says her family, especially her mother, is proud of her accomplishments in such a male-dominated field. She gives special thanks to her mother, who she says “has been with her every step of the way throughout her training, in good and bad days”.