The renovating of the new international
arrivals terminal was the result of the
international pier development which
cost R535-million (US$80-million).
(Image: Designing South Africa) 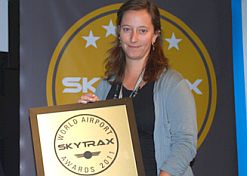 OR Tambo International Airport is Africa’s best, according to a survey of more than 11-million airline passengers of 100 different nationalities.

The airport, based in Kempton Park, east of Johannesburg, won the title of “Africa’s Best Aiport” at the World Airports Awards, held in Copenhagen on 30 March 2011.

The World Airport Awards are based on the results of the Airport Customer Satisfaction Survey which has been running since 1999, and takes about nine months each year to be completed.

The survey measures customer satisfaction at 240 airports across 39 ranges of service delivery which include friendliness of airport staff, check-in facilities, arrivals and transfers at airports and baggage delivery times.

Christopher Hlekane, OR Tambo’s general manager, said: “This is a proud moment for the entire airport community and we would like to sincerely thank our passengers for this honour. But more importantly, I would like to pay homage to the men and women who work tirelessly behind the scenes.”

“This award signifies yet another important milestone for the airport just months after South Africa successfully hosted the FIFA 2010 World Cup. The tournament showed that OR Tambo International is not merely South Africa’s flagship airport but also the gateway for any major African event,” added Hlekane.

Not only was OR Tambo the best airport in Africa but its closest rivals were Cape Town International at number two and King Shaka International in Durban at three. All these facilities are managed by Airports Company South Africa (ACSA), which runs the 10 largest airports in South Africa.

ACSA was established in 1993 to turn South Africa’s airports into world-class facilities able to compete with the best in the world.

OR Tambo International was originally known as Jan Smuts airport but became Johannesburg International in 1994. On October 2006, it was renamed OR Tambo in honour of the late Oliver Reginald Tambo, president of the African National Congress for 30 years.