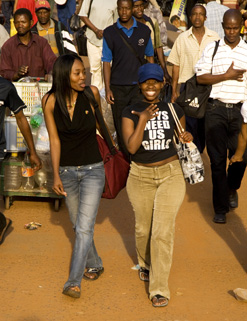 Commuters head home at the Noord
Street taxi rank in Johannesburg. South
Africans in the lower middle class are
most positive about the country and its
future, as are the people of Soweto and
Johannesburg.
(Image: Chris Kirchhoff,
MediaClubSouthAfrica.com. For more free
photos, visit the image library.)

A new survey reveals that the vast majority of South Africans are positive about their country and its future – far more than were optimistic a year ago – with few of them even considering emigration.

The latest results of TNS Research Surveys’ monthly review of South Africans’ attitudes, for June 2009, reveals that 73% are positive about their country – a figure matched only in May 2006. It is “an encouraging return to optimism”, TNS says, after the all-time low of 49% in mid-2008 – shortly after the widespread and brutal pogroms against people from other African countries broke out in May of that year.

Since 2004 TNS has surveyed the level of optimism in South Africa every month and, since February 2009, how many South Africans are thinking of emigrating. A sample of 2 000 adults from the countries’ seven major metropolitan areas are interviewed in their homes. The June survey involved 1 260 blacks, 385 whites, 240 coloureds and 115 Indians/Asians, and has a margin of error of 2.5%.

In June 73% of respondents agreed with the statement, “I am positive about South Africa and its future”, while 19% disagreed and 8% didn’t know know. The number who agreed were a huge improvement on February’s 60% and May’s 68%. In fact, according to TNS, “there has been an uninterrupted rise since the 56% achieved in November 2008”.

The only significant drop is in those who are undecided about emigration, which fell from 7% to 4%, which TNS attributes to the results of South Africa’s April 2009 national elections. “It seems that the elections may have crystallised a little more the feelings of some people,” TNS says in a statement.

Optimism levels vary between race groups, but there is an overall improvement across all groups.

A total of 84% of black people are positive about South Africa and its future, up from 72% in February. At 46% white people are the least optimistic, but also show a rise from 37% in February, while 61% of coloured people are optimistic, up from 47%, and 63% of Indians and Asians, up from 35%.

Negativity has seen a corresponding fall. The breakdown of those who do not feel positive about South Africa and its future is, in each race group, is:

The wealthy are less optimistic than poorer South Africans, although, as TNS points out, there is a correlation between income and race. The income group with the highest positive score was the lower middle class (living standards measure 4 to 6), of which 82% were positive.

There were geographic variations, with people in Soweto and Johannesburg being the happiest, and Cape Town and Pretoria (in the Tshwane Metro) the most negative. But, again, almost all areas showed improvement, except for Bloemfontein, where optimism fell from 70% to 65%, and Gauteng’s West Rand, where it remained unchanged at 65%.

There was less change from February to June in those thinking of leaving South Africa, with the proportion rising from 11% in February to 12% in June.

The percentage of those in each racial group who agreed with the statement “I am thinking of leaving South Africa” is:

Unsurprisingly, given that black people make up 79% of South Africa’s population (PDF, 320 KB) and whites only 9%, most of the potential emigrants are black – even though a larger proportion of them among whites. The 12% who are thinking of leaving is made up as follows:

In each racial group, those who disagree with the statement “I am thinking of leaving South Africa” are:

“This is somewhat counterintuitive; however, perhaps these South Africans are willing to stay and fight out whatever it is that is making them feel negative about South Africa,” TNS says.

Geographic differences are less stark, but follow the pattern of optimism levels. Bloemfontein and Pretoria have the largest proportion of potential emigrants, while the people of Port Elizabeth and Soweto are more likely to stay put.

“Although 19% of respondents did not feel positive about South Africa and its future, many more South Africans do feel positive and, even among those feeling negative, relatively few are thinking of leaving the country,” TNS says.

“The feelings of optimism have grown steadily and without interruption since December 2008 and have regained their all-time high levels.”