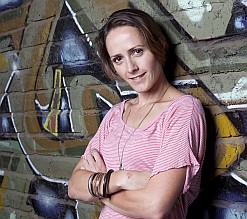 The South African-designed Obami social network offers school teachers, pupils and parents a completely secure environment in which to communicate.

In a world which can no longer guarantee the safety of children, Obami (isiZulu, meaning “mine”) is a step in the right direction.

Because it’s a closed system it protects youngsters from cyber predators and other potential threats associated with open web applications, enabling parents, teachers and children to keep up to date with school-related activities, and keep their peace of mind.

The brains behind the initiative is Knysna-based entrepreneur Barbara Mallinson, a marketing graduate of Cape Town University. She came up with the idea while working for a big corporation in the UK, where she had relocated after obtaining her degree.

With the help of a couple of developer friends, the site first took shape in Mallinson’s flat in London. A grant from the British government provided her with the resources to carry on with development.

“I was aware of the growing popularity of Facebook and the like,” she said, “and at the same time I really wanted to get out of the corporate environment. The initial idea was to design a generic social network.”

Social media has become an inescapable part of daily life, with people of all ages logging on to social networks, blogs and information portals – some manage to control the time they spend online, while others spend hours on the sites.

Pitted against Facebook and Twitter, and dozens of other similar offerings springing up by the day, Mallinson knew her idea had to stand out from the rest – so she took it further by developing it as a model for South African schools.

Teenagers, especially, have eagerly embraced social networking, and yet, said Mallinson, schools are slow to communicate with them through these valuable Web 2.0 tools.

“When I came back to South Africa I saw the need to diversify my strategy, and I also saw a gap for something where kids could be safe online.” The answer was to create a niche social platform, one that addressed important issues of safety in communication for children.

“Changing Obami’s strategic direction and business location, from London to Cape Town, was hugely exciting – I would be coming home to do something good for my country.”

Cape Town-based web developer Lilo was selected for further building of the site, which now sports a bright and funky look that, said Mallinson, is engaging for youngsters.

The first to sign up was private girls’ school St Mary’s in Waverley, followed by St Benedict’s Preparatory, Crawford College in Lonehill and Auckland Park Preparatory – all in the Johannesburg region.

Although Mallinson initially targeted private schools because of their 98% internet penetration, this is just the start and schools of all statuses are welcome to join.

Obami cannot be used by just anyone. Before pupils can start making use of its instant messaging, blogging, diary and budget-planning facilities, the school itself must first register – in other words pupils can’t sign up as individuals, they must attend an Obami-registered school.

The newly registered school’s Obami administrator will then send pupils an authorisation code and invitation to join the network.

Obami, a registered member of the Independent Schools Association of Southern Africa, is free to both schools and pupils, except for SMS bundles, for which schools have to pay. However, this is an optional feature.

Privacy from external sources is absolute, which is reassuring for parents. Even within Obami pupils are able to send private messages to each other – but when they receive a friend request an alert is instantly sent to the parent.

“This allows parents to always be aware of who their child is befriending,” said Mallinson. “It also puts the final accountability in the hands of parents and gets them more involved in their children’s school lives.”

Teachers are able to liaise more closely with parents and distribute school notices, as well as consult with colleagues from other schools. Sharing of study notes or photos from, say, the matric dance or athletics meeting is also possible.

“The beauty of Obami is that it connects with kids on a level they can identify with,” said Mallinson. “When I go around promoting Obami at schools, I invariably find that the teachers are the ones who need educating, while the children grasp the concept immediately.”

At the moment marketing the site is difficult, as it ideally needs a dedicated team, not just the one person who has done all the hard work to date.

The support of IS Labs, the development arm of well-established internet service provider Internet Solutions, will help to spread the word, said Mallinson, and a few promising upcoming partnerships will enable her to appoint regional representatives.

At present Obami is entirely desktop-based, but a mobile component is in development and will be rolled out soon, she said. IS Labs hosts Obami for free.

IS Labs, an internet incubator scheme, was launched towards the end of 2009 and aims to help technology entrepreneurs with funding and mentoring, as well as provide access to its engineers, business connections and other experts.

The company chose Obami out of hundreds of submissions from new internet businesses and applications.

“Obami had the best mix of a great idea and a good team that’s committed to seeing it through,” said Jeff Fletcher of IS Labs. “It’s a really great new service that will help reduce the country’s reliance on expensive international bandwidth.”