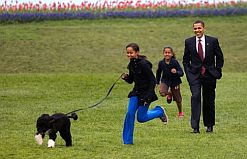 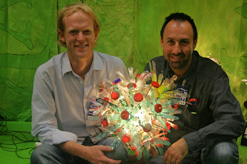 Sean Daniel and Richard Panaino are two
of the bright sparks driving the Magpie
Arts Collective. In their laps is one of their
Blomme (Afrikaans for flowers), which are
made from plastic bottle tops and
discarded wine containers.
(Image: Nicky Rehbock)

Who would have thought that strings of plastic bottle tops and recycled trinkets gathered from the dusty streets of a Karoo village would one day hang in the Obama family’s private quarters of the White House … ?

But they do – although not in isolation. This intriguing assortment is interwoven with shimmering glass beads and delicate crystal drops and encircled by rings of flickering candles to form not one, but two magnificent chandeliers.

The creative force behind these objets d’art is Magpie Arts Collective – a partnership of four friends based in the hamlet of Barrydale, two-and-a-half hours’ drive from Cape Town.

Over the past two years four of their chandeliers have been snapped up by Anthropologie, a high-end chain in the US which sells clothes, accessories and home furnishings, and recently they’ve caught the attention of Michael Smith, a celebrity Los Angeles-based decorator tasked with redoing the Obama residence.

Smith spied the almost 2m-high, Regency-inspired pieces at an Anthropologie store in New York and promptly bought two for the White House revamp.

After being hired by the Obamas Smith said, “The family’s casual style, their interest in bringing 20th century American artists to the forefront and utilising affordable brands and products will serve as our guiding principles as we make the residence feel like their home.”

The arts collective was formed 11 years ago in the bohemian suburb of Observatory in Cape Town. Friends Shane Petzer, a social worker and entrepreneur, and Scott Hart, a fashion designer, owned a house there with a particular zany style.

“Lifestyle magazine House and Leisure heard about our home and decided to feature it in one of their editions,” Petzer recalls.

“The journalist thought our chandeliers and light fittings were fabulous and said they would be commercially viable – not long after that the Magpie showroom was born in a tiny venue nearby and was used as a manufacturing base for home fineware and lighting apparel.

“Because the article referred to us as the ‘Magpies’ of Observatory, we thought it was an apt name for our studio.”

He adds: “We have always loved shiny things, things that catch and play with light – sparkle and throw light into all sorts of directions – that’s the excitement of chandeliers – they are extrapolations of our sparkly ideals of fantasy and ideals.

“Our Magpie chandeliers are nests of ideas, borrowings and findings, clashing and complementing, shiny and matt – rather like life – they showcase a picture.”

In 2005 fine artist Sean Daniel and Richard Panaino, who was in the film industry at the time, joined forces with Petzer and Hart and they moved their studio east to Barrydale, an area known for its wine and fruit and conveniently situated along Route 62 – a picturesque tourist byway that meanders between Cape Town and the Garden Route.

Today Daniel and Hart concentrate on design and manufacturing, Petzer oversees the social responsibility aspect of the business and Panaino handles Magpie’s administration and marketing.

Petzer says they have always used a lot of recycled and re-purposed materials in their work, but since moving to Barrydale and seeing the vast amounts of litter and pollution in the area, they’ve upped their recycling drive.

“We now have a collection bin on our veranda and basically people in the village bring us all their recyclable bits. Tins, plastic, all that sort of thing. Once they’ve been cleaned, we use them to make up bespoke pieces, which we send all over the world. Those little doppies [bottle tops] in the chandeliers, those are literally pieces that have come off the streets of Barrydale.

“It’s quite funny that we’re turning trash into art and selling it to America,” he says, laughing. “There’s Barrydale dust in the White House.”

As for inspirations, Petzer says they draw on the work of two rather eccentric Karoo artists: the reclusive Helen Martins who created of the now world-famous Owl House, and outsider artist Outa Lappies who is best known for his lighuisies – lanterns crafted from scrap metal and colourful shards of old glass, which he sells to local and foreign tourists.

“Outsider artists function in mediums that are not conventional and they deal with issues that are not your run-of-the-mill, preconceived artistic ideas. For example, Outa Lappies always says, ‘if you work with your hands you’ll never be hungry’ – we love that message and the bearing it has on our work,” he adds.

Designing pieces is not a “cut-and-dried” process, according to Petzer. “It seems that as commissions come in, we find ourselves using up the materials that we have in the storage bins in ways that we never thought possible. It’s always a surprise and fascinating to see how people’s trash, becomes people’s art. Sometimes we produce pieces from the studio and display them in the gallery and it sells!

“Other times we might be following a specific brief from a client to do something, like build a chandelier or even help a client build a booth at a conference or trade show to sell their products. In those situations we stay true to our philosophy and incorporate re-purposed materials in the design and execution of that product.

“Each chandelier is unique – some take a few weeks to build, while others take months. They vary in price from a few hundred to a few thousand rand. The chandeliers that Anthropologie buys from us take about four weeks to build. Some pieces have only unfolded and manifested into real objects many years after we first created them – different members of Magpie work on the pieces and they grow over time … we like the idea of the product to nestle in our minds,” he adds.

Magpie has a strong social conscience, using art to highlight pertinent issues in their community. “One of our focus areas is, of course, recycling and environmental issues, but we also take a strong interest in unemployment, HIV/Aids, TB and alcoholism, which are all rife in our community – particularly among Barrydale’s farmworkers,” Daniel says.

Small enterprises are often pressed to respond to social issues around them, but many don’t know how to do this – to link social responses and concerns to their enterprise’s activities. This is the area in which Petzer helps Magpie shine.

He’s an Ashoka Fellow, belonging to an international body of 1 800 social entrepreneurs and social change activists, and has worked tirelessly as an HIV/Aids activist for 22 years. He’s also one of the founders of the South African Sex Worker Education and Advocacy Taskforce, better known as Sweat.

“The social responsibility framework of Magpie works as part of our marketing strategy, and helps to showcase good practice for other small and micro enterprises,” Petzer says.

Rooi Doppies is one of the team’s initiatives that gives support to non-governmental organisations in Barrydale. The name is Afrikaans slang for “red lids”, which are used to seal cheap bottles of wine sold in the district. Dop also means to be watchful, as in ek hou jou dop, which suits the project, as it means “I am watching over you”.

Through Rooi Doppies a soup kitchen has been set up to feed the poor, and assistance provided to an afterschool project called Net Vir Pret (an Afrikaans phrase meaning “just for fun”), which encourages children to do their own recycling drive.

“They pick up plastic bottles lying around and clean them. We then show the children how to cut the plastic to look like flowers and let them do a bit of painting with water-based paint,” Daniel adds.

These painted plastic cut-outs are then assembled into elaborate balls with a bulb in the middle and sold as funky lighting. The proceeds from the sales are ploughed back into Net Vir Pret.

Then there is an income-generation project for semi-skilled and unemployed residents in Barrydale. There are currently seven participants and they make catchy light bulb covers out of beads, knitted copper wire and fronds of plastic. Magpie then buys the product back from them to sell in their studio.

“This project is in stark contrast to employment. We teach skills and independence along the lines of Outa Lappies’ saying that if you work with your hands you’ll never be hungry,” Daniel says.

The participants work from home and do as little or as much as they want. “The bulb work is ideal because it doesn’t take up a lot of space and can be done by someone living in a shack. It also requires very little energy so people living with HIV or TB can also participate.”

To show its appreciation for the community’s support, Magpie builds an elaborate eco-Christmas tree each year in the town centre and puts on an exhibition of its work. This is followed by a well-supported fancy dress party that draws crowds from as far as Cape Town and Johannesburg.

In 2007 and 2008 then Cape Town mayor Helen Zille commissioned the team to design similar Christmas tree installations and these were displayed in the city’s civic centre.

After creating masterpieces for mayors and presidents, what do the four “Magpies” see for the future?

“We have come from an idea born on a kitchen table to this great stage. We think we have the right combination now to make us a winning team,” Petzer says.

“In the future we are keen to see ourselves become leaders in our field – in today’s business world it only means one thing: go global, act local. If you continue to plug and pursue your dream, you will succeed.

“After 11 years of producing chandeliers and engaging in craft we are not about to down tools – if anything, we are keen to take up more challenges!”

• Do you have any queries or comments about this article? Email Nicky Rehbock at nickyr@mediaclubsouthafrica.com