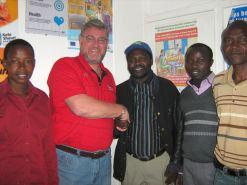 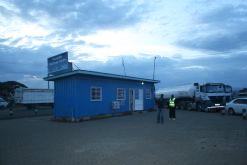 The North Star clinics are open after
hours when drivers have parked
for the night.
(Image: North Star Alliance) 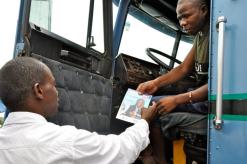 Matthew’s commitment to this cause has just won him a place among the continent’s top five social entrepreneurs, named by the Schwab Foundation for Social Entrepreneurship, a sister organisation of the World Economic Forum (WEF).

Speaking from Addis Ababa where the proceedings of the 2012 WEF Africa are underway, Matthew says that the recognition of his work – which spans over 20 years – is a great honour.

“There was such a build up to the awards ceremony last night, and it is only this morning that it is all starting to sink in. Only now I have been able to reflect on it,” he says.

Matthew received the prestigious accolade for his foresight in establishing an organisation, known as the North Star Alliance, to address the impact of HIV/Aids on mobile workers such as truck drivers in Africa.

The North Star Alliance is a cross-border HIV prevention initiative that has set up a network of roadside wellness clinics along key transport routes in Africa, such as border posts or transit towns where large numbers of trucks stop and sex work and other informal trades flourish.

What makes this particular initiative so important is that it is very much in line with the WEF’s objective to find new ways to deliver healthcare to communities in Africa.

But many years ago when Matthew first got the idea to establish a project that could take HIV education to the road where truck drivers spend most of their time, he had no idea that it would achieve success of this scale.

“Never in my wildest dreams did I think I would stand on a stage and receive this award,” he says.

North Star’s wellness clinics are open to everyone, but they are designed for the specific health needs of truck drivers and other mobile populations. They provide prevention and treatment services such as HIV counselling and testing; treatment for sexually transmitted infections; basic health services; information and education and behaviour change communication.

“South Africa is ahead of the rest of the continent when it comes to HIV prevention in the freight industry, but elsewhere in Africa there is a major need for such services,” he says.

Small beginnings on a cold night

He remembers the humble beginnings of the project, particularly the very cold nights on the N3 highway, one of South Africa’s most popular transport routes.

“While I was at the ceremony last night, I remembered sitting in an ambulance next to the road on the N3 highway near Harrismith,” he recalls. “I remember asking myself what I was doing.”

This was the first pilot project to gauge how truck drivers responded to the idea.

“I was with a nurse and we set up a tent near one of the popular truck stops to encourage drivers to come in,” he says.

At first only a few drivers made use of the facility, but by the end of the week as the trucks travelled further news got out about what was on offer and more people were visiting their tent.

“The model works well because the clinics are where the drivers pull up,” he explains. Along South Africa transport routes, the centres are set up at truck stops but in other countries, they are stationed at border posts and hot spots along the transport routes.

Matthew, who is North Star’s Africa director, has been working in the education and health sectors most of his career. He realised that taking HIV prevention to the road, where the drivers are, is vital.

The issue of health and mobility came under the spotlight during the 2003 – 2005 Southern Africa food crisis, when world food programmes struggled to find enough truck drivers to deliver relief food to communities.

In terms of freight transport, truck drivers are important for the economy as many businesses in Africa rely on them as a resource.

North Star’s observation at its inception was that with the incidence of disease being so prevalent, the numbers of drivers available to transport freight has, over time, decreased dramatically.

Their research showed that simple factors such as limited operating hours and the location of health services are huge barriers to healthcare provision. For instance, there may not be suitable large vehicle parking or the health facility may be closed in the evenings.

The North Star clinics are open after hours when drivers have parked for the night.

“The life of a truck driver is harsh. Once a driver leaves the depot, he is away for up to three weeks on the road without access to healthcare,” explains Matthew.

He says that once started the project, he quickly realised that the clinics couldn’t only provide healthcare for truck drivers exclusively – sex workers on route and surrounding communities also needed help. “Now our clinics are also providing treatment to these people.”

The initiative has the support of many transport companies and because it is a public- private partnership, North Star also works closely with governments in various countries to align its healthcare offering with local state programmes.

“Whenever we set up a new clinic in a specific area, we sign a memorandum of understanding with the ministry of health in that country,” explains Matthew. “In some countries our clinics complement their healthcare provision services by acting as a satellite to what they are doing.”

Sometimes the respective governments provide staff and medical supplies for the clinics, but otherwise it is up to North Star to raise funds to employ nurses and buy medication.

Since opening its first centre in 2005 in Malawi, North Star has set up 22 additional centres in 10 countries across the continent.

“North Star has exciting new projects on the card,” he says. “In the next 12 months we will upscale the clinics to include mobile container clinics that can travel around.”

Matthew says they are setting up a commercial arm of the project, in partnership with fleet safety management company Fleet Forum, that will focus on safe driving practices such as driver skills and managing fatigue.

The initiative, which launched in a pilot phase at the beginning of May, makes use of an innovative training approach that communicates with drivers via CDs that can be played in trucks – an ideal means of communication for drivers who are always on the road.

The recording on the CD is structured to sound like a radio programme with a disk jockey that plays music, carefully selected, based on research, to find out what type of music drivers enjoy.

“The training module comes where radio stations usually play adverts between songs. Instead of adverts, quick information on driver safety will be played,” he explains.

Selected from more than 500 candidates, the work of Africa’s social entrepreneurs has been set apart as examples of how entrepreneurship in the public interest can transform the continent.

Matthew’s groundbreaking work in area of HIV/Aids and healthcare provision, two of the continent’s biggest challenges, is making a significant difference to the lives of thousands of people in Africa.