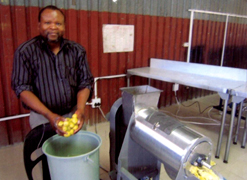 Creator of Nguni Juices Norman Mpedi in
his factory. 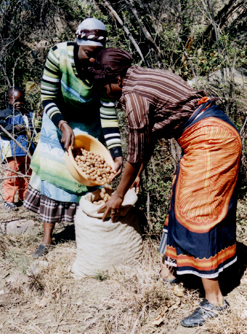 Workers collect fruit in the veld for
processing. 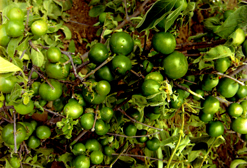 The umviyo fruit is rich in vitamin C and
fibre.
(Images: Norman Mpedi)

It all started when Mpedi could not find work in the South African National Defence Force following the disbanding of Umkhonto we Sizwe. At this stage he often used to think back to times when he and his fellow comrades survived solely on what was available in the Angolan bush. Sometimes this only amounted to edible wild fruits growing in abundance.

He recalls: “We ate this fruit, the umviyo, sometimes for up to three weeks at a time and we survived.”

Umviyo is the isiZulu name for the wild medlar or Vangueria infausta, a wild fruit similar to the better-known marula (Sclerocarya caffra) or Mnguni in isiZulu. Nutritionally, it’s as rich in vitamin C and natural fibre as the latter.

In juice form it is an almost unrivalled high-energy natural supplement. Knowing this, Mpedi knew there was untapped potential in this source and started to investigate it further.

“No-one had this idea before,” he says.

This was back in 2003 and Mpedi began tackling the challenges of researching various indigenous fruits and their potential for juicing, and finding financial assistance for his start-up venture. He also had to register his product and patent his juice with the Companies and Intellectual Property Registration Office.

With the help of specialists in the field from the University of Johannesburg and Pretoria, his final product was tested for nutritional quality and taste, and finally given the thumbs-up.

“All my products are organic and completely free of chemicals,” says proud Mpedi. His products are currently only available at selected tourist and health shops, at some fruit and vegetable outlets and certain petrol stations.

Mpedi is still looking for additional capital to fund expansion.

In the meantime, his efforts have not gone unnoticed. In February 2011 Mpedi got a personal mention in Finance Minister Pravin Gordhan’s annual budget speech.

Gordhan related how Mpedi, Mlondolozi Kosi – with his ICT training centre in Willowvale in the Eastern Cape, and Antonio Pooe – with Exactech Fraud Solutions in Johannesburg, Cape Town and Durban – are small business operators setting an inspiring example for others.

“Small businesses are an important source of jobs. Businesses that employ fewer than 50 workers account for 68% of private sector employment,” Gordhan said at the time.

Mpedi employs about 12 workers at his factory in Mokopane in Limpopo. As the fruit ripen in summer, his busiest times are from January until March when he employs additional local people to help with harvesting.

In 2007 he was a finalist in the small companies category of the Department of Trade and Industry’s Technology Awards, and in 2008 he was recognised by the Industrial Development Corporation for his research on indigenous foods.

In the new year Mpedi hopes to branch out into other products, such as alcoholic ciders from the same fruit.

In addition to umviyo, he harvests monkey oranges and a plant known as utshwala benyoni, also known as white birds brandy, because when birds eat it they “become very noisy and lively”, Mpedi says.

This plant is used as a natural enhancer in the fruit juice as it has a minty flavour.

“Next year my business will grow even more, for sure,” he adds.