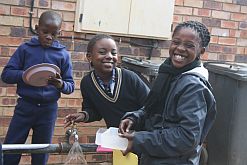 It has become a “moral imperative” for major businesses operating in South Africa to adopt water saving schemes for their buildings, thereby helping the country sustain the declining resource.

CEO of car rental company Avis, Wayne Duvenage, did not mince his words at the Sustainable Water Resource Conference and Exhibition. The event, held in Kempton Park on 16 and 17 August, was attended by leading water experts and businesspeople and supported by the International Marketing Council of South Africa – among a range of sponsors.

Recycling water for reuse in buildings was the experts’ principal recommendation. Homeowners are also advised to go for recycling technologies.

Avis saved 75-million litres of water in 2010 in its major centres in Johannesburg, Cape Town and Durban.

Avis has pumped an additional R1.5-million ($208 000) into the construction of underground water filtration and recycling facilities at its three main depots. The aim is to save at least 95-million litres of water each year.

“We decided to recycle water because that was the right thing to do,” said Duvenage. “We’re recycling water that was going down the drain.”

The company reprocesses grey water from washing machines and baths, which is then used to wash most of its fleet of 20 000 rental cars, while potable water from public sources remains available to employees for hygienic use.

Harvesting rainwater is a focus of Avis’ recycling efforts. “You know how much it rains in Cape Town, so it’s nice to switch off municipal water and use rainwater,” said Duvenage.

It’s always recommended for entities to study the impact of their business on the environment, he pointed out.

South Africa is water-stressed, experts at the conference revealed. Reports have pointed out that the country runs the risk of facing critical shortages by 2020.

“South Africa is stressed both in the quantity and quantity of water that we have,” Duvenage said.

Alison Groves, a sustainability consultant at WSP Green by Design, said: “In South Africa we need to get beyond the idea that water is always going to be available.”

Her consultancy group has established itself as an industry leader in the greening of major buildings, having helped big companies such as Absa, Nedbank and Woolworths introduce water-saving and eco-friendly schemes in their properties.

Banking group Absa’s headquarters in downtown Johannesburg have been fitted with recycling and rainwater harvesting technology that allows it to save at least 43 000 litres of water every day.

Retailer Woolworths’ distribution centre in Midrand, north of Johannesburg, is another facility with a large grey water reclamation system. Groves pointed out that the centre has “irrigation ensured for 10 months per year without using potable water”.

Woolworths saves R1-million ($139 000) in municipal water bills per year thanks to its recycling efforts.

Other companies, such as South African Breweries, are rolling out major water-saving schemes in a bid to help protect the precious resource.

Duvenage pointed out that “business is starting to change its behaviour” in accordance with the green revolution, but there is room for improvement. “We believe business has to act much faster,” he said.

It’s not only businesses and public entities that should assume the responsibility of saving water, but homeowners can play a major role as well.

Its founder Jeremy Westgarth-Taylor said that water recycled and harvested through its system is suitable for irrigation, toilet flushing, cleaning and washing.

Homes can reduce consumption from 280 litres to “as little as 100 litres per day” and save up to 90% of their municipal water bill by using the system.

“But it’s done in such a way that you don’t change your lifestyle. You just take control of your own supply,” said Westgarth-Taylor.

The late Kader Asmal, former Minister of Water Affairs and Forestry, told Water Rhapsody, in a 2010 letter to the company, that its water recycling system helped nourish grass and shrubs in the garden of his Cape Town home.