The Bench Marks Centre for Corporate
Social Responsibility, a new research
facility launched by North-West
University, will be looking into
ways to improve the living
conditions of communities in
the mining industry.
(Image: theglobeandmail.com) 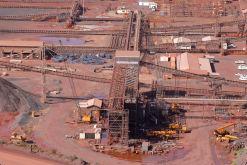 Sishen open-cast iron-ore mine, situated
in the Northern Cape is one of the five
largest iron-ore mines in the world and
the largest in Africa.
(Image: Image: MediaClubSouthAfrica.com.
For more images, visit the image library)

The Bench Marks Centre for Corporate Social Responsibility, a new research facility launched by North-West University (NWU), will be looking into ways to improve the living conditions and wellbeing of communities in the mining industry.

The Bench Marks Foundation is an independent organisation that monitors corporate performance in the field of corporate social responsibility (CSR), with a particular focus on social sustainability and economic empowerment.

The NWU’s interest in mining comes from its geographical location in the North West province, known for its mining activities. Mining is responsible for more than a third of the province’s GDP and 94% of South Africa’s platinum is mined here – giving it the nickname of the Platinum Province.

The NWU’s research will focus on the mining industry and related CSR projects of mining companies in South Africa and the Southern African Development Community region.

“We have a diverse province in which mining activities in particular figure quite extensively,” says Prof Freek Cronje, director of the Bench Marks Centre for Corporate Social Responsibility. “Thousands of employees are involved and we must make sure that the wellbeing of these communities is looked after.”

The establishment of the new centre is an important development for South Africa, which is considered a world leader in mining. With the research generated by the unit, mining companies can up their game when it comes to CSR.

As its main goal, the centre wants to challenge corporations and governments with progressive research that can help to prioritise the sustainability factor of CSR initiatives.

According to John Capel, executive director of the Bench Marks Foundation, the organisation has already been involved with research on the impacts of CSR for some time. But with the help of the NWU, they can broaden their focus.

“We find that there are many companies that misinterpret the term social corporate responsibility. However, we can now, together with the NWU’s expertise, help to make sure that companies fulfil their responsibilities,” he says.

Cronje, who also has a background in sociology and migration studies, says there is a major gap between policy and practice.

“Many companies have very good CSR projects, but sometimes they are misdirected.”

With the help of research generated by the centre, companies can improve their CSR and ensure the strategic implementation of such projects, while more communities who rely on mining for their income can live better quality lives.

As part of the centre’s mandate, it also issues reports to companies about their CSR performance.

The research facility is establishing a good working relationship with many mining corporates, with some even requesting that the centre carry out research for them.

Research that makes a difference

The new centre will research areas such as quality of life and the state of natural resources where communities are directly affected by mining activities.

Issues such as the impact and spread of HIV; asbestosis; water pollution; air quality and job creation will come under the spotlight.

Cronje says that although the North West province is one of its key research areas, masters and PhD degree students from the NWU are also working on mining and CSR in other SADC countries.

He says the Bench Marks Centre is involved in a major collaborative project with the Swedish International Development Cooperation Agency, an authority under the jurisdiction of the Swedish Ministry for Foreign Affairs.

The partnership will conduct research in Namibia and Botswana, in conjunction with Stockholm University, to trace CSR in the supply chain of Swedish parts, trucks and technology sold to mining companies.

The centre is also involved in research in the coal mining sector in Mpumalanga.

CSR-related courses are offered at masters and PhD level at the university.