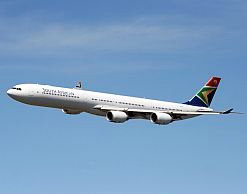 The South African National Taxi Council’s
new low-cost airline is due to officially
launch on 16 September, and will start
operating in November.
(Image: airplane-pictures.net)

The South African National Taxi Council (Santaco) plans to launch a new low-cost airline to accommodate the scores of people from rural areas who work in the main cities and are forced to make their frequent trips home via bus or taxi, as they cannot afford plane tickets.

Santaco’s business development officer Nkululeko Buthelezi said the airline would be called the Santaco Express. The service is due to officially launch on 16 September, and will start operating in November.

Buthelezi said the airline would focus on routes untouched by other domestic airlines – going into more rural areas of the country.

“We specialise in awkward areas because that’s where our business is,” said Santaco president AJ Mthembu.

Buthelezi named local company AirQuarius Aviation, which works with other domestic airlines in the country including SA Express and SA Airlink, as the initial managers of the airline. Once the venture is up and running AirQuarius will hand over all management to Santaco, most likely within 18 to 24 months.

AirQuarius Aviation is based at Lanseria Airport and provides services such as aircraft management; training and development of pilots and crew; aircraft sales, leasing and charters; and aircraft maintenance.

According to Buthelezi, the company will initially supply Santaco Express with a 100-seater craft and a crew, as well as the necessary aviation licences.

The airline is planning to operate one or two flights a day between Lanseria International Airport in Gauteng and Bhisho in the Eastern Cape, with a stop thereafter at Cape Town International.

Mthembu said the ticket will include transport from the taxi rank to the airport, and then a transfer to a taxi rank at the destination.

“We will be building everything into one price in the affordable sector.”

He added that the final cost of a ticket had not yet been decided, but that Santaco was considering prices ranging between R500 (US$74) and R600 ($89) for a one way ticket.

“The sky is the limit”

“We are so excited about this airline,” said Luthando Nyawuza from Bhisho. “I work in Johannesburg but my family lives in the Eastern Cape, I try to visit home every two months which is a long taxi trip taking 14 to 15 hours. This is usually over a weekend, which means I spend a whole day travelling there spend one day with my family before having to travel another full day back to Johannesburg.”

Nyawuza said that the new airline would cut down on travelling, and allow for more family time.

He added that the high cost of air travel and the long distances between airports and residential areas made it difficult for him to afford a plane ticket home.

“I appreciate what the taxi drivers are doing for us. They are really looking out for us people from the rural areas because they come from there and are considerate to our needs. I never thought this kind of service would be possible for us. Clearly only the sky is the limit.”

He said that the proposed air ticket prices compare favourably to what commuters already pay to travel in buses or taxis.

Santaco CEO Bongani Msimang said Santaco planned to transform the taxi industry, and the airline was but one of many initiatives in the pipeline. He said Santaco aims to become a leader in mass affordable, safe, and reliable transportation.

Another of Santaco’s goals, said Msimang, was to move away from an informal structure, and become a body that was appropriately organised and run like a corporate business at all levels.

“This would involve redefining the scope of the industry to include other transport modes such as bus and rail to ensure we don’t lose our market share,” he said.