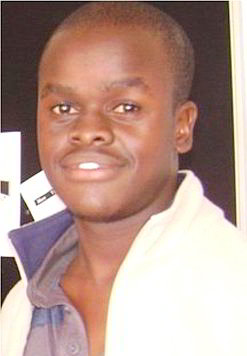 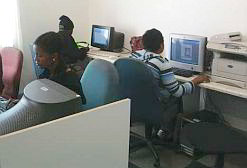 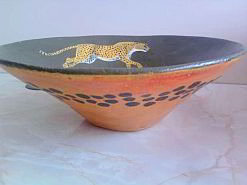 At age 20, Neftaly Malatjie is already a distinguished leader in his community of Diepsloot, a sprawling township grappling with underdevelopment and poverty.

Diepsloot Youth Projects, the non-profit organisation he founded in 2005 at just age 16, is making a difference in the lives of fellow youngsters.

The hard-working Malatjie is the CEO of the organisation, which he runs with a group of volunteers and professional trainers.

The list of community initiatives taking place under the auspices of Diepsloot Youth Projects is burgeoning, ranging from the popular computer-training and pottery and craftwork academies to the school and community outreach programmes.

“We’re a non-profit organisation that’s mainly focused on awareness, capacity-building and training,” said Malatjie during an interview in his makeshift office.

Originally called Diepsloot Youth Arts and Culture, Malatjie started the organisation as a performing-art project after identifying a need for it in the community.

“I was attending an acting school and I thought this type of thing is needed in the township,” he said.

The success of the initial phase was encouraging for Malatjie. “The support we received was amazing, as well as the participation and performances. Even parents were supporting it.”

The organisation expanded when Malatjie began working with other young leaders from Diepsloot. They started in-depth research on what the community desperately needs, and found that “our people need jobs, they need skills”.

And so Diepsloot Youth Projects was born.

A recent highlight is being awarded an accreditation certificate, in July 2011, to operate their computer-training facility as a Microsoft IT Academy.

They also got accredited by the South African Qualifications Authority (Saqa), meaning the academy’s more than 200 students will graduate with recognised computer studies certificates.

Malatjie said they are now hoping to secure an ISETT Seta-accredited training provider licence in the next few months.

Microsoft and Saqa accredited them after “they were satisfied with everything and found that we’re really committed”, while the Seta licence will be granted after the organisation appoints an assessor for the programme – according to Malatjie.

The academy caters for youngsters who’ve completed secondary school and those who left in grades 10 and 11.

Diepsloot Youth Projects has now appointed experienced professionals to serve on its board committee, as well as in management and executive teams.

The organisation is planning to build a proper facility to operate from in the near future, but they are still accruing funds for construction.

The piece of land donated to the organisation by the City of Johannesburg is currently scattered with containers, used as makeshift classes. This is where their “modest” building will be erected.

Chikore Takaidza, a Zimbabwean youngster living in Diepsloot, attends the computer academy and is hopeful that he’ll gain the necessary skills to find a job.

“I’m going to get out here a changed person in terms of how I conduct myself in the business world,” he said.

Malatjie and his team also help community members find employment. In addition to drafting CVs for job-seekers, they circulate adverts on vacancies in their internet cafe.

The pottery and craftwork academy is another project that’s realising tangible results. Its students, most of whom were once unskilled youngsters, are already producing artistic creations for the market.

“The whole aim is to help them generate income for themselves. We now have people who are selling their products, some are exhibiting in markets.”

The craft school is also helping unearth talent among once-idle youngsters. “The school doesn’t teach craft, but looks at talent and goes beyond it,” said Malatjie. “We never say to our students your art is nice. We always say go fix this or that.”

Their sewing training project has also taken off, noted Malatjie, as they now have necessary material.

Malatjie’s ultimate dream is to see the majority of Diepsloot youngsters becoming self-reliant and able to find jobs.

“We are changing stones into self-moving assets,” he said, referring to Diepsloot’s many youngsters who are despondent about their prospects.

“I want people to have success stories, and would like it if one day people say that that organisation made them who they are.”

Creating entrepreneurs is part of the organisation’s aim. “If someone starts a business, my people will get jobs,” Malatjie said.

The organisation is planning to start operating in other underprivileged areas in the near future. “We’re about to spread our wings to other townships,” Malatjie said.