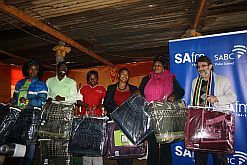 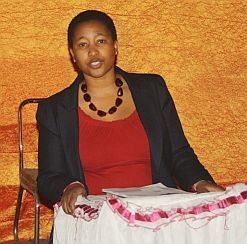 Kone Gugushe of Nedbank is confident that this year’s campaign will be successful. Banking group Nedbank kicked off its annual winter campaign for this year by giving blankets to young children in Orange Farm, in the south of Johannesburg, and building houses for the area’s motivated volunteers.

Now in its third year, the programme was launched at Stratford Ext 2, an area of the township that has a high unemployment rate, on Tuesday 5 June.

Bringing hope where there is little

Pupils at Little Stars and Poelano centres, who were given a total of 200 blankets to get them through the chilly season, were only too happy to receive some reprieve from the cold weather.

The no-fee centres take in orphans and children whose parents cannot afford to pay crèche fees. Little Stars looks after 98 children while Poelano has 48 pupils under its care.

Later in the day came the unveiling of a housing project in which Nedbank partnered with insurance companies Old Mutual and Mutual and Federal as well as non-profit organisation Habitat for Humanity to build 11 homes for some of the special residents in the area.

The beneficiaries of the houses, which are near completion, have helped build houses for other disadvantaged families since the start of the campaign in 2009.

“There are 533 stands here at Stratford Ext 2 in Orange Farm and Habitat for Humanity has built 233 houses,” said Michael Mamabolo of Habitat.

Habitat, which was founded in 1976, builds houses for communities living in poverty in South Africa, by focusing on simple, decent designs that are also practical to live in. They have branches in Johannesburg, Durban and Cape Town.

The initiative has several criteria for choosing beneficiaries within their volunteer programme. Some of the prerequisites are that:

• the famliy must be living in sub-standard housing, but own the land on which the house will be built as per the standards of the housing department;

• they must qualify for a government housing subsidy; and

• family members must perform sweat equity in terms of Habitat standards – this involves spending a minimum of 60 hours helping other families to build their homes.

“Sweat equity means they must have worked at least 60 hours helping build other homes before they can be helped to build their own,” said Mamabolo.

Orange Farm is a relatively under-developed settlement that lies 50km south of Johannesburg. It was initially established by residents who settled in the area in 1988 and grew exponentially before its status was turned into that of a formal township by the City of Johannesburg two years later.

Residents were then given ownership of the land and were free to build their own homes if they wished to do so.

Nedbank and Old Mutual are both sponsoring the building of five houses each, and Mutual and Federal is sponsoring one. Habitat’s involvement comes in the form of gathering volunteers to do the actual building.

This year Nedbank is investing R500 000 (US$59 373) towards its nationwide drive and is further encouraging its employees, clients and all South Africans to donate blankets, which can be dropped off at Nedbank branches across the country.

Multi-award winning singer Zahara, who is also Nedbank’s financial fitness ambassador, made an appearance, along with the municipality’s ward councillor for the area, Siphiwe Mshaisa.

Nedbank’s executive for corporate social responsibility, Kone Gugushe, said they are honoured to be able to make this contribution to the community of Orange Farm.

“Social sustainability is the key to a prosperous nation,” she said, adding that over the past two years, the company has received amazing support for its winter project.

Through the generosity and support of Nedbank employees, its clients and ordinary South Africans, she said, this year’s campaign will be an even greater success.

National radio station SAfm, which is the media sponsor of the campaign, was represented by station manager Dennis O’Donnell, who said: “It gives SAfm great pleasure to partner on a campaign of this magnitude.

“We look forward to bringing you live coverage from the nine provinces that we will be visiting where people will be telling their stories that will awaken us as a society to do more in our communities.”

Zahara, who expressed her familiarity with the conditions in which disadvantaged families live, recounted a childhood for her and her siblings in which they sometimes had to go to school with no shoes.

“That’s what makes me so happy to be part of a campaign that makes a difference in the lives of ordinary people.”

The next stop for the campaign is the Free State, one of the coldest provinces in South Africa.