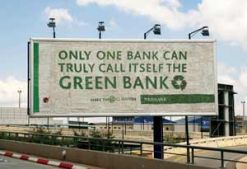 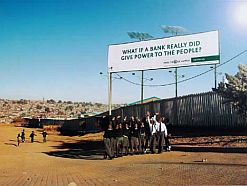 Schoolchildren benefit from the solar-
powered billboard that stands in their
school grounds. (Image: Treehugger) 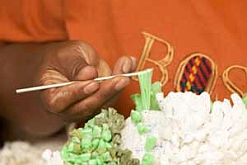 Leading South African financial services provider Nedbank is once more setting the pace in good environmental practice, with a billboard made entirely of recycled plastic bags at Johannesburg’s OR Tambo International Airport.

Claiming that “Only one bank can truly call itself the green bank”, the billboard was hand-made by a group of seven crafters, all of whom are the breadwinners in their families. It took six weeks and more than 2 000 recycled plastic shopping bags to make the remarkable 40m-long advertisement.

Nedbank’s head of marketing Greg Garden said the new creation showed the bank’s commitment to doing things differently, and would hopefully serve as an example and inspiration to South Africans.

“Too many South Africans don’t understand the need to recycle as a way of preserving our environment,” commented Garden in a statement, “and this billboard represents just one of Nedbank’s efforts to change this mindset and demonstrate the practical application of recycling principles in everyday life.”

With its Climate Change Position Statement issued in March 2009, Nedbank became the first South African bank to make a firm pledge to reduce its impact on the environment in terms of energy, water and paper usage, as well as carbon emissions.

The resourceful advertising agency in charge of the Nedbank brand is Cape Town-based Net#work BBDO.

BBDO’s executive creative director Rob McLennan said the Nedbank campaign was an example of how the agency is building its clients’ brands whilst maintaining an awareness and respect for environmental matters.

“This billboard has created jobs, married advertising with social conscience, showcased our local artistry and has removed some of the country’s non-biodegradable rubbish,” he said.

Although reusable plastic shopping bags are considered better for the environment than paper bags because they need less energy to produce, transport and recycle, a bag may take hundreds of years to degrade.

This is not the first time Nedbank has shown that it has a conscience where the environment is concerned, and has turned that conscience into innovation.

Said to be the world’s first solar-powered billboard, it is titled “Power to the People” and has 10 solar panels. Harnessing the fierce power of the African sun, each panel generates 135 watts of power that provides energy for the MC Weiler Primary School in Alexandra, in whose grounds the billboard stands.

The school saves over US$240 (R2 000) a month in electricity fees and furthermore can supply a hot meal daily to its 1 100-plus pupils, many of whom will not get a decent meal anywhere else. Stored energy gathered from the solar panels during the day lights the billboard at night.

The ground-breaking hoarding swayed the jury with its contribution to the upliftment of the community. Jury chair Jean-Remy von Matt described it as work that continues to work and to provide, in contrast with the many short-lived promotions that ultimately serve little or no purpose.

According to Net#work BBDO, the power generated is enough to boil 18 1-litre domestic kettles continuously at any one time.

Towards the end of 2007 Nedbank’s second solar billboard was installed at the Athlone Youth and Family Development Centre in Athlone on the Cape Flats, south-east of the Cape Town city centre. However, this one also has a wind turbine for extra power generation, providing energy for the kitchen, security lights and geysers. This drastically cuts the community centre’s monthly electricity bill.

The centre works with youth in the area, many of whom come from troubled homes and have become drug addicts and school dropouts. It provides a home for to up to 22 youngsters at a time, helping them to overcome their addiction, go back to their families, and rebuild their lives.

Director Sydney Dicks described the billboard as a godsend, saying that it has enabled the centre to install a 200l solar-powered geyser and two security floodlights as well as slash the monthly bill.