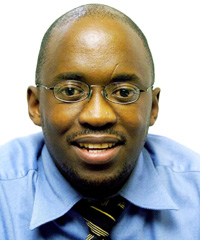 The advert in which Desmond Tutu exhorts South Africans to pull together to build the kind of country they each want to live in has got me thinking about national attributes and traits. What does it mean to say the Germans are punctual, the Italians expressive, the French elegant, the Zulus (on the few occasions they are actually considered a nation) fierce, the Japanese hardworking, the Nigerians confident and the Chinese proud?

Does it mean that if Nigerians have one thing in common, it would be pride? What about calling the Italians expressive (which, as you know, is a polite way of saying excitable and hot-blooded)? Does that mean every Italian cannot make a point without using her arms? As for calling the French elegant, does that mean that every French citizen knows his Louis Vuitton from his Christian Dior?

I cannot provide a scientific answer to any of these questions but have banked enough anecdotes in my short life to know that this business of national attributes is absolute tosh. Let’s take the myth of French elegance. I have visited France (both the metropole and one of its Caribbean peripheries) at least three times in the past couple of years. I have also spent two summers in a French language school whose main selling point is that its faculty is drawn from native French speakers from both the French metropole and the periphery. I would like to think that that’s enough French people and enough time in France to allow me to pass judgement on France’s sartorial standards.

Do you know how many French people would, in my book, qualify for the adjective ‘elegant’? One. Yup. One. You read that correctly. Only one French person would qualify for the label ‘elegant’. And, boy, did she look elegant! She was the kind of person so hip, so stylish, she made flip-flops look like haute couture! She was so on top of her game, she made simple scarves look like they were made just for her.

She was no spring chicken, either. She was on the other side of fifty, at least. As for her compatriots, the least said about them, the better. The colour clashes, the ball-crushingly tight pants, the sloppy hair, the apparent lack of familiarity with a shower … these were just some of the things that stood out for me.

Then there is the one about the punctual Germans. Well, I recently spent a year studying in England. I had one German professor and one German classmate. None could keep time to save their Teutonic behinds. I would always smile at my German classmate as she burst into class huffing and puffing. She rode a bike and lived only a mile away from our campus. I, too, rode a bike but lived six miles away from campus. So, she could not exactly blame her tardiness on the traffic. “Aah, my tardy German friend,” I would say to her every now and again. She did not like it. But what could she do! She was tardy.

My professor, on the other hand, always had to preface his seminars with the standard opening: “Sorry, I’m late.” Coming from someone else, that might have been annoying. But coming from a German, I loved it. I loved their constant shattering of the stereotype of the punctual German.

Then there is the one about the proud Chinese. Now, pray tell, which people are not proud? Every nation has a history and, for that reason, every nation is both proud and confident. A friend has remarked that if only South Africans had half the confidence displayed by Nigerians, then we would be set. According to my friend’s thinking, Nigerians have little to be proud of given the unmitigated disaster that is postcolonial Nigeria.

South Africans, on the other hand, have a lot to be proud of given the modest but significant achievements of post-apartheid South Africa, my friend says. However, she adds, South Africans do not carry themselves with quite the swagger that would be in keeping with their place in the world. My friend may well be right. South Africans can be their own harshest critics.

After the British, no one seems to indulge in schadenfreude at their own expense quite like the South Africans. We seem to delight in our misfortune. Listen to the way we talk about crime, the power outages, the dysfunctional metropolitan police system and corruption. Listen to a South African moan for five minutes and you can’t help but wonder what he or she would have to moan about if you took away all these problems. Does that mean that complaining is a national South African trait? I don’t know and, given that I am, as a rule, suspicious of national traits, I would say there is no such thing as a national trait.

But I also can’t be blind to the fact that South Africans tend to be the biggest complainers I know. Maybe, just maybe, instead of trying to appeal to the better angels of our nature, Bishop Tutu should urge us to be selfish South Africans and do whatever we can to build the kind of South Africa we each would like to live in. I would be willing to bet that such a cynical pitch would stand a better chance of success than the sunny call he is making at present.

Hey, a working South Africa might mean less to moan about but it would least be the kind of place we each would want to live in. Isolated from other South Africans.