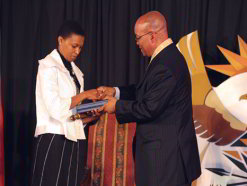 On 27 April, Freedom Day, President Jacob Zuma bestowed National Orders on a number of worthy South Africans and citizens of foreign countries. The Presidency released the list of recipients for 2011 on 21 April.

The National Orders are the highest awards bestowed by the president of the Republic of South Africa upon those who have contributed meaningfully in making the country what it is today.

As an initiative that was implemented at the dawn of South Africa’s first decade of freedom, the National Orders programme contributes to the symbolic building and consolidation of the country’s new democracy.

In the execution of this responsibility, the president is assisted by the director-general in the Presidency, who is also the chancellor of National Orders and an advisory council.

The National Orders seek to enhance social cohesion. They serve to foster the spirit of unity, nation building and social cohesion within South African society, as they honour those outstanding individuals from all walks of life. They celebrate the spirit of one nation, many cultures as reflected by the diversity of the Rainbow Nation.

At this, the 16th investiture ceremony, South Africa will honour men and women for exceptional and outstanding contributions, many of whom are simply legends and others icons of selfless sacrifice and service, courage and commitment. These people of deep humanity and principle, truth and talent, rank among the finest of human beings, who unquestionably deserve acknowledgement.

The president will also award men and women whose dedication to their fellow human beings, their esoteric interests, their art and sport have embellished society, communities and citizens with honour and credit. They are men and women who have nourished South African souls with the beauty of art, splendour of performance and the grace of sport as well as groundbreaking advances in science, medicine and many other fields.

1. ORDER OF MENDI FOR BRAVERY

Donald Thumamina Mboto (Posthumous)
For a selfless act that led him to lose his life while trying to save a drowning child in St. Michaels beach in KwaZulu-Natal

Matola Raid Martyrs
For paying the supreme price for freedom and for sacrificing their lives in pursuit of a just, free, non-racial and non sexist democratic society

Thokozani Mandlenkosi Ernest Nene (Posthumous)
For his outstanding contribution in enriching the isiZulu language and culture, and his revolutionary invention of new lexicon in isiZulu

Sindiwe Magona
For her outstanding achievements in literature, playwright and for using her pen as weapon in the struggle for peace, social change and freedom

Basil “Doc” Bikitsha (Posthumous)
For his excellent contribution to the profession of journalism and literature, and for being an important social commentator in his chosen beat

Marlene van Niekerk
For her outstanding intellectual contribution to literary arts and culture field through poetry, literature and philosophical works

Mannie Manim
For his excellent skills in theatre lighting design, administration, practical and technical contribution to theatre in South Africa and the field of arts

Nowongile Cynthia Molo
For her outstanding contribution to the development of women through the “Women in Agriculture and Rural Development” (WAARD), a self-empowerment initiative that changed the lives of many families

Rev. Phambani Jeremiah Mzimba (Posthumous)
For his exceptional contribution and pioneering spirit in the formation of the African Independent Churches and his instrumental role in the development of a new understanding of Christianity among the African believers.

Violet Sarah Matlou (nee Phiri)
For her outstanding contribution to the struggle for liberation and for the ideals of just, non-racist and democratic South Africa

Ismael Chota Meer (Posthumous)
For his excellent contribution to a non racial and democratic South Africa, struggle for liberation, workers rights and for the formation of Natal Teachers Union

Matsobane Morris Matsemela
For his excellent contribution to the struggle against apartheid and standing for the ideals of a free, just and democratic South Africa

Lionel “Rusty” Bernstein (Posthumous)
For his political activism, abandoning privilege and dedicating his adult life to the struggle for liberation, democracy, human rights and peace, and for striving to build a better Africa and a better world through the anti-apartheid crusade

6. ORDER OF THE COMPANIONS OF OR TAMBO

Hélène Passtoors
For her excellent contribution to the struggle for liberation, democracy and human rights, and for waging a concerted struggle against racial oppression as an ANC activist and operative in South Africa, including engagement in underground work

Viacheslav Shiryaev “Ivan”
For his excellent contribution to the struggle against apartheid and attainment of a democratic, non-racial and a non-sexist South Africa, and promoting friendship ties, joint cooperation programmes and projects between Russia and post apartheid South Africa

Andrew Jackson Young
For his contribution to the struggle against oppression in South Africa, striving for better and fairer global social order and championing the cause of human rights in the international arena

Luis Inácio Lula da Silva
For his outstanding contribution to the advancement of the agenda of the South and for the creation of a just and equitable system of global governance.